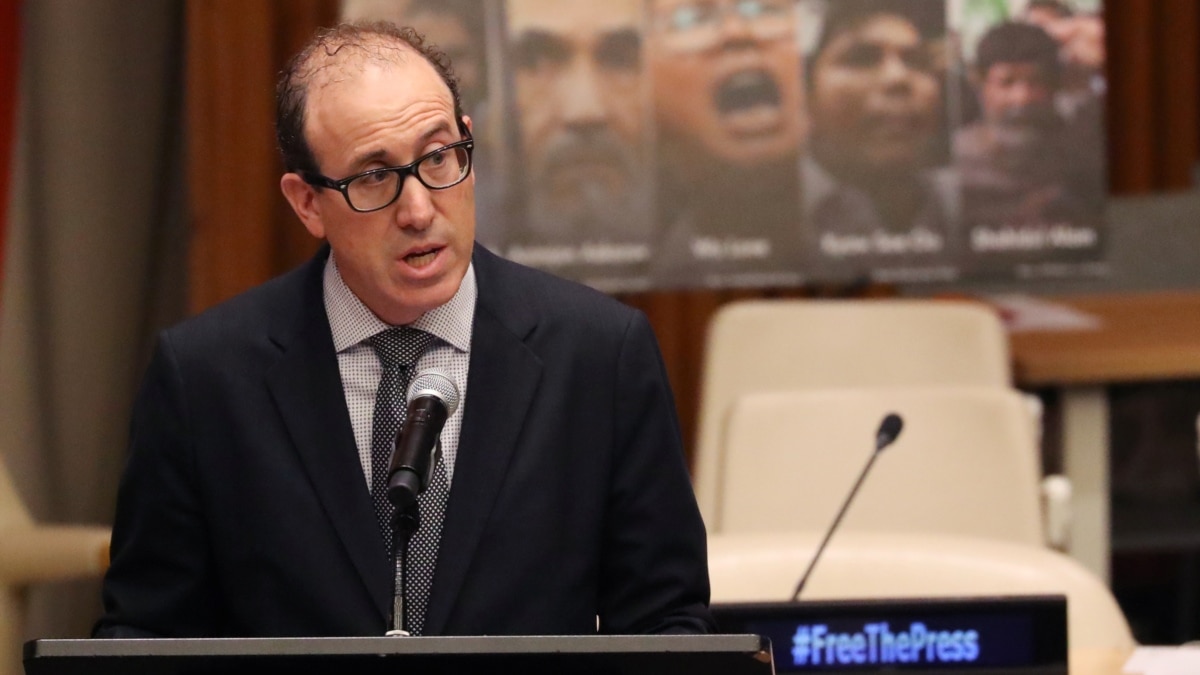 The work of journalists is becoming more and more dangerous, with a record number of detainees for their coverage and dozens killed each year.

As of December, more than 290 journalists were in jail for their work and at least 24 had been killed, according to the United States-based Committee to Protect Journalists. The group’s data reflects an increasingly dangerous environment for the media.

As CPJ’s Executive Director, Joel Simon has seen how journalists have changed the world while becoming targets of law enforcement.

In an interview with VOA last month, Simon spoke of the heightened risks to global media.

After nearly 25 years at CPJ – 15 as executive director – Simon will step down on December 31, but says he remains committed to defending press freedom.

This interview has been edited for clarity and length.

Question: How has press freedom around the world changed during your tenure as Executive Director of CPJ?

JoÃ«l Simon: When I started at CPJ in 1997, it was a time of deep optimism, about democracy, human rights, freedom of the press. After all, journalists played a vital role in the collapse of the Soviet Union. Reporting in Latin America contributed to the collapse of military governments in that region.

There was a feeling that independent journalism could really change the world, and I think maybe it is. But then there was this tremendous backlash.

Repressive governments, autocratic governments around the world understand this, especially through technology. And in the information age, those who control the narrative power are in control.

Journalists help shape public perception. They help shape the narratives. Thus, they are in conflict with governments around the world – both repressive governments that use violence and legal action, but also in democracies.

Increasingly, people live under partly free governments and live in an environment in which press freedom has deteriorated, in which their ability to access information and independent media and to hold them to account. to governments is more limited.

This is the moment we are in now. And I think the pendulum will swing someday. It’s always like that. But we have to recognize this moment in history.

The environment for independent journalism has changed everywhere, including the United States. The challenges are greater. That period of deep optimism that existed when I started this work 25 years agoâ€¦ unfortunately, that is no longer the case.

Q: What remedies should be available to protect and support journalists?

Simon: It must be recognized that these are long-term trends and that the reasons why they occur are complex. There are simply no short-term solutions.

The one thing we can certainly do that is really critical is that the United States must be able to assert its world leadership. And this is not currently the case.

I think the American leadership is really counting on these issues.

When (former) President (Donald) Trump started using the term â€œfake newsâ€ and calling journalists â€œenemies of the people,â€ we saw autocratic governments around the world embrace that same rhetoric and use to crack down on independent journalism.

When we have seen the (George W.) Bush administration embrace the rhetoric of the war on terror, we have seen governments clamp down on the media under the pretext of clamping down on terrorism.

In the Biden administration, what happened in Afghanistan really undermined the credibility of the United States. Journalists who have built a vibrant media community in this country have been seriously threatened by the collapse of the regime, and the US government has failed to step in to protect them.

These journalists were disappointed. Journalists around the world saw what happened, and I think it damaged America’s credibility even more.

Q: Are there any special cases that really affect you?

Simon: This job as the Executive Director of CPJ is a job where you come to know grief and loss.

I have lost so many friends. I have lost journalists who came to my office, some of them won the International Press Freedom Prize (CPJ). And they won it because they’re so brave, they’re fearless. But this fearlessness sometimes means that they don’t understand, identify, and respond to threats facing them.

I’m going to talk about a friend of mine, Javier Valdez Cardenas, in Mexico. He received an international press freedom award for his courageous coverage.

Several years after receiving the award, he received threats. We had conversations with him. We wanted to evacuate it. He said he couldn’t leave. He said he had to stay and keep covering the story.

He was killed (in May 2017). And it was so tragic, because it was really preventable in the end.

We figured out why he wasn’t leaving, but we were heartbroken. All we can do is fight for justice.

It’s always a tough fight. But some of the people who committed this crime are in prison today, and we will continue to fight for justice for her and so many others around the world.

Q: What types of coverage can lead to attacks on the media?

Simon: When you see journalists killed, they tend to cover organized crime. Daphne Caruana Galizia, the blogger murdered in Malta (in 2017), had unveiled the official protective canvas in Malta.

Or if you look at some of the journalists who were murdered in Russia, or Mexico, or Jan Kuciak (in Slovakia in 2018). They were all reporting on the intersection of organized crime and government protection that facilitates and allows these criminal networks to function.

When journalists expose this network, they threaten profitability. Unfortunately, in many parts of the world it can get you killed.

Q: What inspires you to continue?

Simon: What inspires me is that I really think there is nothing more essential about the way humans connect to each otherâ€¦ (than) the sharing of information. And journalism is absolutely essential for that.

So I am deeply optimistic that this need will persist and people will continue to struggle to gain access to the information they need to make sense of their lives. And support the journalists who do this work.

Where I’m less optimistic is that these kinds of efforts threaten entrenched power structures, including authoritarian states. And they become increasingly adept at managing, controlling, and retaining their ability to define the narrative.

We must continue to fight, because press freedom is the battle of the information age, and we must win.

My optimism does not come from a review of current reality, but from an acknowledgment of the issues. I believe that many people around the world recognize that they ultimately support independent journalism. They ultimately recognize the value of what journalists do. And they are finally ready to fight for it.