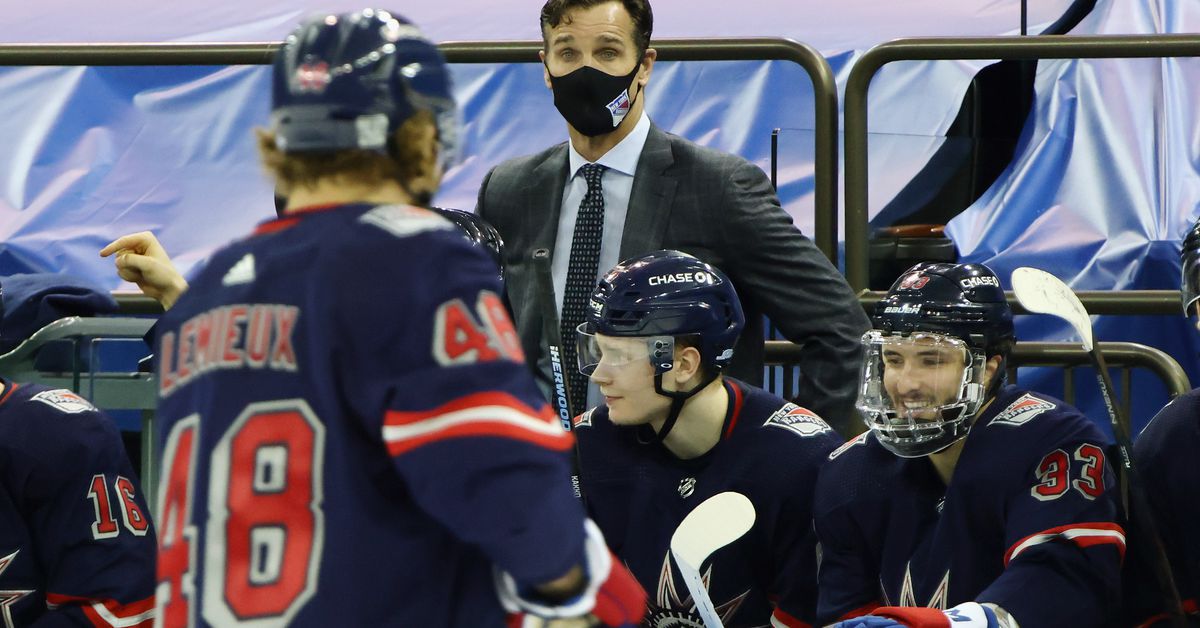 One of the last boxes for the San Jose Sharks offseason has been ticked, as former New York Rangers head coach David Quinn has been officially named the team’s new head coach. . On Tuesday morning, the organization held a press conference to officially welcome Quinn to San Jose.

Sharks general manager Mike Grier wasted no time explaining the decision to hire David Quinn. Although the organization spoke with many qualified candidates, Grier highlighted the fact that he, Hasso Plattner, Jonathan Becher and Joe Will were convinced Quinn was the one for the job:

“[Quinn] had two great interviews with Joe and myself. I think he has a lot of experience at different levels, which means a lot to me.

Grier also acknowledged his own personal history with Quinn on a personal and professional level, but assured that was not the deciding factor in the hiring. However, Grier noted some administrative benefits the two could have upon entering the organization:

“How I see the game and how [Quinn] see the game, they fit together well. That’s not to say we won’t push and challenge ourselves if we see things differently, to help us improve, but that’s definitely part of it. Quinn, he’s been through that before with Rangers, so I think he has a good idea of ​​what wins in this league and how you should play, so our visions are definitely aligned.

Quinn echoed Grier’s enthusiasm for introducing him to the organization, as he saw it as an opportunity to get started alongside someone he already knew. “One of the things that drew me to this job was the opportunity to work with Mike. Mike and I have known each other for a long time – I have enormous respect for him professionally, but more importantly, personally. Mike has done some good things here for the first few weeks, and I look forward to working with him.

One advantage Grier cited was Quinn’s experience working with young players, both in his coaching experience in the NCAA, as well as on a more global stage with USA Hockey.

“You see the work he’s done with the group behind the Olympics and the world championships – he’s taken a lot from those players. I think everyone would agree that neither of these teams were a highly skilled team – I think the Olympic team were the youngest team in the tournament, but they went undefeated in the preliminary round . He gets the most out of his best players, he knows how to manage his best players and he believes in some of the principles of player development that I believe in. When I put it all together, he really was the best choice for this job. .”

However, a fairly widespread concern with Quinn’s hiring was the perception of how he uses his rookie players in the roster. With many young players in the system moving up and down between the Barracuda and the Sharks over the past seasons – especially last season – questions have been raised as to how the new bench boss will handle it. For Quinn, this particular concern came as a surprise, as it was the first time he had heard of it.

“I coached a lot of young players. I think if you want people to be better, you’re going to be tough but fair, and that’s always been something I’ve tried to make my philosophy, be tough but fair.

Quinn also explained that part of his job — and the coaching philosophy as a whole — isn’t necessarily about keeping players in positions where they’re most comfortable. Instead, players “are not necessarily going to do the things they do [most able] to do to continue to be successful”, helping them to become more adaptable and versatile players.

“We always used to jokingly say ‘at the end of the day, coaches are human nature fighters’ – you’re going to ask people to fight human nature.”

Grier also came to Quinn’s defense on the matter, drawing examples from her time in New York to present a broader perspective on her decisions.

“Whether you’re an 18-year-old in the league or a 35-year-old veteran, the responsibility is on everyone. I think David did a really good job managing this, keeping everyone accountable and keeping his dressing room intact. If he had just started giving Kakko and Lafrenière frontline changes and power changes, the Kreiders and Zibanejads of the world wouldn’t have been happy about that, so I think he handled it with the young players as well as he could.

As for a coaching synergy between the Sharks and their AHL counterpart, Quinn assured that it would be relatively seamless, as he had an ongoing relationship with head coach John McCarthy since their time at the University of Boston.

“The fact that he and I have a previous relationship and a lot of respect for each other personally and professionally, I think that will make our relationship with the Barracuda unique. Obviously our communication will be constant, often, and it’s not “There will be no surprises with what happens with our AHL team. Any decision we make will be well thought out and well informed.”

As previously established, Quinn sees the game of hockey almost identically to Grier: aggressive and fast-paced. More importantly, Quinn wants to instill the idea that the Sharks are “a tenacious, fast team that plays above people – taking time and space, a structured team that plays with freedom,” noting that the most league coaches prefer slow-paced play – a perfect contrast. Quinn also stressed the importance of the effort in order to fill in some of the glaring offensive holes of past seasons.

“I don’t think there is a more effort-based sport than hockey. It’s played in a very small area, it’s very fast. Effort can overcome a lot of things, and I think if you want to be more productive offensively, it’s partly about effort, but there are also things you can do tactically that can put your team in a better place. position.

When it comes to Quinn’s coaching philosophy, it’s no surprise that he values ​​personal relationships with the people he works with and strives to lead.

“My coaching philosophy has always been about relationships. I don’t care what you do for a living, if you don’t have a connection to the people you lead – whether you’re an office manager or a hockey team coach – you’re not going to get the more people. Regardless of level, when the people you lead know that you care about them and want the best for them, you have a much better chance of getting the best out of them.

Quinn also talked about the more personal side of building relationships with players, but also finding the balance that goes with it:

“One of the things you’ll learn is personality management – when to stay on top of people, when to step back. For me, the number one responsibility I have as a coach here is to manage our players and put in a position to be as successful as possible, making them the best players possible. I think you always try to find that balance as a coach – sometimes you have to be tough on them, sometimes you put them down walk.

He also mentioned the value he places on collaboration, which is getting other people’s input on the direction of the team and applying it where possible.

“That’s one of the things I learned in New York: to balance the information, to balance the opinions you get from people, and to really coach your personality. Doing that has put me in a position to get to where I am today, and I think it’s important for everyone, no matter what you do.

Speaking about his time with Rangers, Quinn emphasized that this opportunity won’t just be about transplanting all of his strategies from his time in New York onto the Sharks roster. While that’s easy to do, he knows no two teams are the same, especially after working in several different leagues at this stage of his career.

“You have to coach the team that you have. From a coaching perspective, you have standards — coaching DNA, I’d like to call it — that will never change. I also think you have to have adaptability with the roster you have so there are some things that we’re going to require we’ve done with the Rangers that we’ll require here but there may be a different approach in some of the things that we do or don’t according to our staff.

He made similar remarks when talking about his time coaching in the NCAA and the U.S. National Team Development Program:

“I think every coach draws from their experiences, and I’ve been very fortunate to coach at different levels, whether it’s the US national program in Ann Arbor, Michigan, or where I started at the college. I think it certainly helps when you’re connected to young people, understanding what players of that age are going through – not just professionally, but also personally. A 22-year-old NHL player is not immune to the other challenges of a 22-year-old player who doesn’t play in the National Hockey League, and I think it’s important that the coach and people in the organization realize that. Without a doubt, these experiences have helped me to deal with young players.

Overall, Quinn has high hopes for the organization and the direction it is headed. It’s clear he has a plan for the team and expects to see it through.

“With an opportunity like this to work with Mike, Joe and Jonathan, we certainly know what’s ahead of us and what’s to come, but we want to bring back that winning culture that’s been here for a long, long time. We’ll definitely be building a team you’ll be proud of, a team you’ll want to watch, and we’re very optimistic about the team we’ll have this coming season.