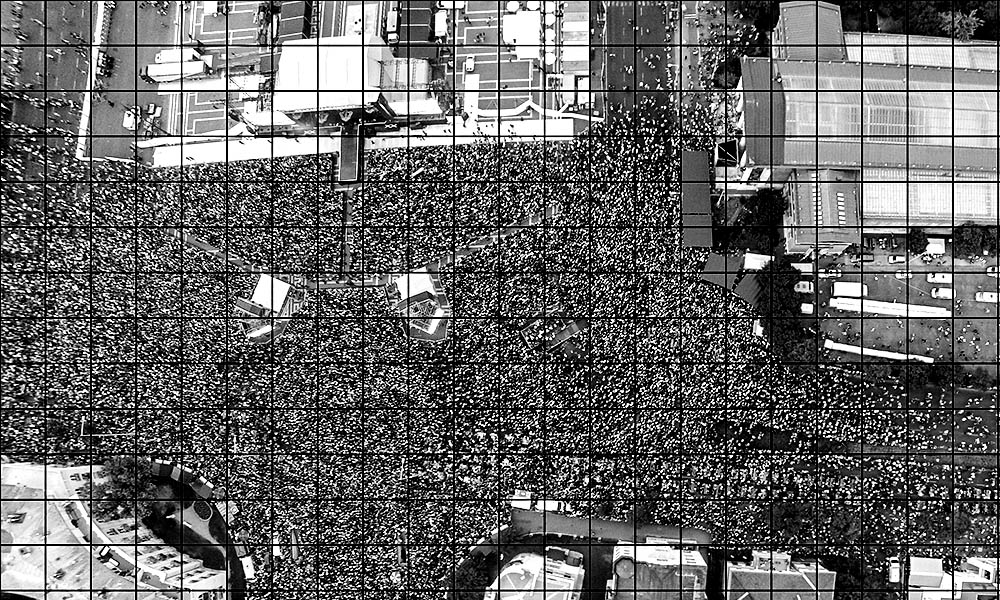 From Standing Rock to Syria, drones are used to hold the powerful to account. Let’s keep it that way.

The civil rights movement and Moore’s Law collide to transform politics. On the streets, smartphone technology is being used to document social life like never before, putting power in the hands of the public and make us all eyewitnesses.

That same technology, bolted to cheap, easy-to-fly drones, also provides an overview of politics on the ground. Indeed, a recent explosion in the availability and affordability of drones has led to an increase in their use to support social movements. In the years since a drone was first used to document a protest – an event held in 2011 against Russian President Vladimir Putin – they have been a constant presence at protests in societies where democracy is threatened.

A few years ago, during large-scale protests in Hungary, where the media are increasingly government controlled, my students and I used a cheap consumer drone to capture footage of tens of thousands of people who took to the streets to protest an Internet tax proposal. The government insisted it was a small crowd of cranks and anarchists, but our footage told a different story – and the proposed government policy ultimately failed.

More recently, drones have been deployed at events where a new perspective helps activists communicate their message better. An integer item in the New York Times featured aerial footage of anti-racism protests across the country and around the world. In the aftermath of George Floyd’s murder, the images were as vivid as the message was clear: People everywhere stand in solidarity against police brutality.

Photographer Johnny Miller has traveled the world to capture the steep line between rich and poor communities. It is a widely recognized fact that inequalities are increasing. Knowledge of the facts does not always motivate public action; Miller activist photography strikes a more visceral note. Here too, the imagery cuts through a jumble of tables and graphics in order to tell an important socio-economic story.

Protesters and journalists around the world are including drones in their toolkit, and the reason is simple – it allows them to tell a compelling story from a new perspective. Along the way, it changes the policy on the ground.

Of course, governments are deploying them too: Earlier this year, the Department of Homeland Security used drones to monitor peaceful Black Lives Matter protesters, making at least 270 hours of footage available to other federal agencies and local law enforcement agencies nationwide. These images join a growing arsenal of high-tech police surveillance tools. The recent protests could have the unintended effect to push police forces off the streets and deeper into less visible and less accountable forms of coercion and control.

In order to better understand the reverse side of the use of drones, my team analyzed all uses of non-governmental drones, over a period of six years. We ended up with 15,000 stories, and when we analyzed the data, two trends emerged.

The first was that what many of us fear most – drones used to spy on and commit crimes – are actually quite rare. These things happen and get the attention of the press. But ultimately, people tend to use technology in accordance with broader social values â€‹â€‹and commitments, and there are fairly broad social restrictions against this type of bad behavior. Simply put, social norms are fairly stable, so new technologies don’t automatically trigger lawlessness.

The second notable trend was the obvious presence of disruptive use of drones. By ‘disruptive’ I simply mean that technology is used to make something that is not politically or socially acceptable – something that disrupts the status quo. Documenting police abuse and highlighting urban inequalities are examples that fit this definition perfectly. Less disruptive examples include innovative scientists, environmentalists and activists using these small, affordable devices to document deforestation, monitor endangered animals, and track down poachers.

Elsewhere, drones are used to provide utilities in hard-to-reach places. Every year, I take my students to visit Zipline, a startup that started using drones to deliver nationwide distribution of medical supplies across Rwanda. These days, you don’t have to go to Kigali, the capital of Rwanda, to see Zipline in action. The California-based company now operates an emergency treatment center carrying personal protective equipment (PPE) in Kannapolis, North Carolina.

Zipline’s efforts to deliver plasma to Kigali and PPE to Kannapolis are clearly in the service of the public good – an example of prosocial behavior – and are politically and socially acceptable: in other words, it is not disruptive.

The use of drones during demonstrations – especially to hold the powerful to account – is something quite different. When activists used a drone to document large-scale protests at Standing Rock, police responded by shoot them down. When independent journalists used drones to document war crimes in Syria, security forces responded by shoot them down. After we flew our drone in Budapest – and the protest captured the coverage of the International New York Times – the government quickly passed a new law that would ban similar coverage in the future. The reason for these responses is clear: From Standing Rock to Syria, drones fly for the public good and challenge the political status quo.

Drones are democratizing aerial surveillance, but more needs to be done to ensure that access to public airspace is open to the public, rather than reserved for the exclusive use of large companies like Amazon and powerful military interests like Homeland Security. Regulations that would allow this technology to evolve naturally have been blocked by a combination of public concerns over privacy and security and national security concerns over predominantly Chinese technology. It may seem that the easiest solution is to give a handful of licenses to the already powerful.

As a social movement specialist, I hope this will not happen. Instead, I support every city that has painted Black lives matter in a billion-sized font that can be seen from space. I support every protester who has used drones to monitor police behavior, and every reporter who has used one to document the scale and scale of protests around the world.

The moment we are in right now is shaped by the complex interplay of the social and the technological. Whether the payload is PPE for frontline workers or an airborne camera trained for law enforcement, new technologies, including drones, present new opportunities to support each other and hold the powerful to account.

Austin Choi Fitzpatrick is an author and educator whose work focuses on the culture, politics and technology of social change. He lives in California, holds academic positions at the Kroc School at the University of San Diego and at the Rights Lab at the University of Nottingham, and is the author of several books, most recently “The right drone: how social movements democratize surveillance.“