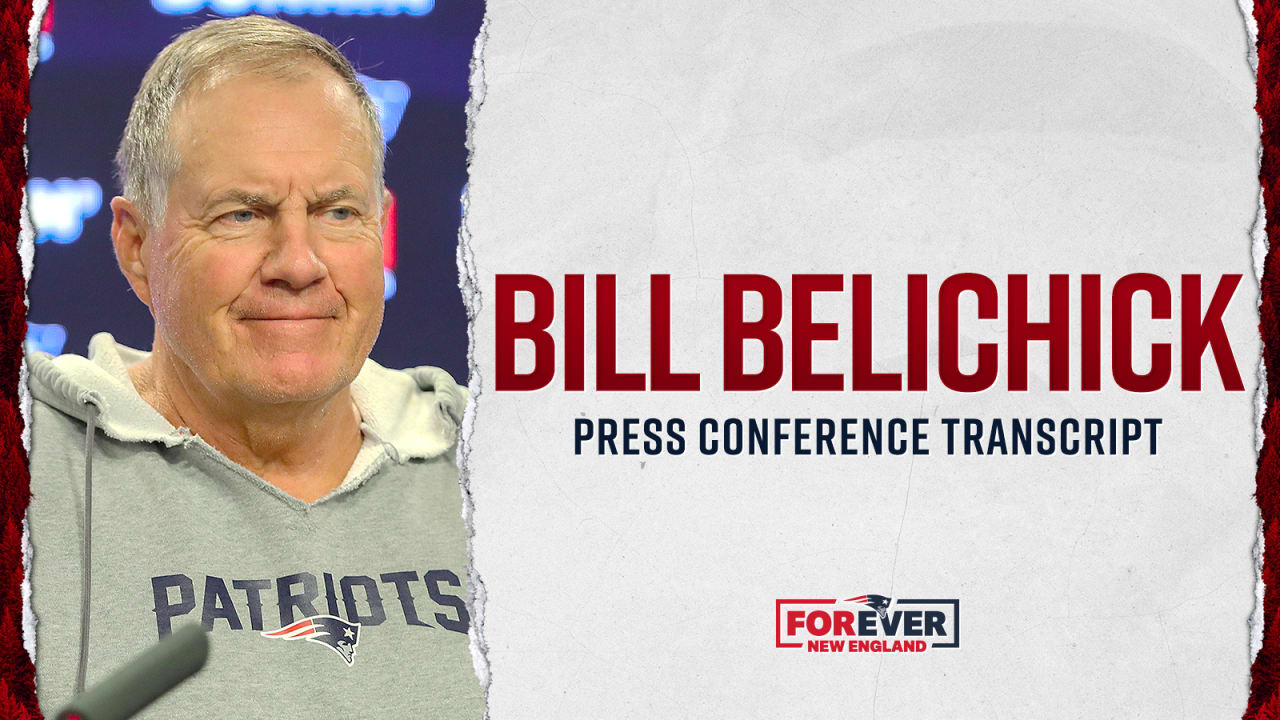 BB: Hello. How are we? Great. Good. We’ve watched all of our movies here on the Packers. For starters, you see the scanned films, on the dashboard and you see those names up there, and the great players and coaches they’ve had there. It really brings back a lot of memories and appreciation for what this franchise has done and really how great they have been. [Cecil] Isbell, [Clarke] Hinkle, [Don] Huson, [Curly] Shred, [Vince] Lombardy. You go straight on the line. Isbell and Hutson, great combination there. Hutson started draft, first true receiver Isbell, Hutson combination [Cecil] isbell [Don] Huson. Now we see them all over the league. Every quarterback receiver combination. It all started eighty years ago with them. You watch the Packers for the past two years. Number one seed in the NFC. Some things don’t change too much. It’s a very good football team. Well coached. Well balanced. I think we saw it last week at the Tampa game. You know defensively, in the kicking game. Solid performance. Of course, offensively, he’s a great, great, great quarterback. Good ball carriers. Good talented players. Very effective offensively. These guys really know what they are doing. They are well trained. They perform well. You can see they made some adjustments and improvements defensively and in the kicking game that showed up at the start of the season. It’s a good football team. Good opportunity. Good challenge for us. Great football environment still in Green Bay. So excited to compete there. It’s been good to get on and get a good look at the Packers and how they do things in great detail. It’s not a team they’ve played in a while. But they are good. They are good. They are good players. Well coached. The three units. Rich [Bisaccia] did a good job for them. Offensively and defensively. Their figures, their performances speak for themselves. Saw Mac [Jones] a little while ago. Better and better. I probably won’t be training today, but I’ve made a lot of progress here over the last 48 hours. So keep plugging away. Take it day by day. See how it goes. And that’s where we are for today.

Q: Do you expect Mac [Jones] start sunday for you guys?

Q: When you go through the process of preparing the game plan and you have this level of uncertainty at quarterback, what impact does that have on that process when you start developing the game plan? ?

BB: Not too much. by Brian [Hoyer] acquired a lot of experience. He did everything we would want to do. Mac [Jones] would be able to do it with, I think, a modicum of practice if that were the case. So take it day by day. We really don’t do anything differently.

Q: Is the plan for Mac [Jones] have some sort of procedure to help with the process here?

Q: Are you and the team on the same page as Mac [Jones] and his team when it comes to injury on how to progress and move forward?

BB: Yeah, I’m not really sure what the nature of that question is. Day by day it is improving. See how it goes. Day by day.

Q: Does he have a high ankle sprain?

BB: Day to day. What do I look like? A doctor. An orthopedic surgeon. I do not know. Talk to medical experts.

Q: What are the staff medical experts telling you?

BB: Day to day. We will evaluate it. What difference does it make for me? What do you think? Shall I read you the MRI? It’s not my job.

Q: But it’s there and they tell you about it, don’t they?

BB: Yeah, it’s getting better every day. We’ll see how it is tomorrow. It’s much better than yesterday. We will see.

Q: You mentioned Brian [Hoyer] sooner would it start sunday if mac [Jones] can’t you go?

Q: What have you seen from him over the years to know where he stands with knowledge of the offense?

BB: He knows that better than anyone. I mean from an overall experience perspective, this year is this year. But Brian [Hoyer] had a lot of experience. He’s been in a lot of different systems. Seen a lot of football. Took lots of shots for us in various capacities. I think he played well during pre-season. If we need him to go, he’ll be ready to go.

Q: How do you balance getting Bailey [Zappe] potentially work if Brian [Hoyer] starts and Bailey is a snap?

BB: It’s the same situation every week. Whoever takes the snaps, there are some for the other player. Most of them are part of the scout team. But we decreased the quarterback reps. Dates back to [Tom] Brady and [Drew] Bledsoe in 2001. We stopped doing that after the Rams game. 20 or more years ago.

Q: What kind of progress have you seen from Baily [Zappe] since the beginning of summer? Joe Judge was saying yesterday that he was starting to see the bigger picture and that he had done a good job of not making any rookie mistakes?

BB: Like any rookie quarterback, he has a lot to learn and he’s learned a lot. He learned a ton. He’s a smart kid. It processes information well. Treat him well. Every click helps him. Anyway, walkthrough, scout team reps, head to head. Things like that. But he has a long way to go.

Q: Is there any sort of emotional impact for a locker room if a quarterback runs out of time in your experience? Or could there be?

BB: I don’t know. brian [Hoyer] will be ready to go if he has to be ready to go. I think we all know that. So I don’t really care.

Q: Obviously with Aaron Rodgers you would call him as good as anyone. Is there any added significance for a guy like that where you can’t show before the shot that would inform him in any way?

BB: Try to do that every week. Try not to give quarterbacks more information than necessary. You have to be in a position to play. So sometimes the trainings force you to do a little. But yeah, we definitely don’t want to give him more than he already has. He’s seen it all a million times. They don’t return the ball. He doesn’t make many mistakes. He never did. He’s a very resourceful quarterback. He makes the games that are there. Then he makes a few games that really aren’t there. Then he rarely makes a mistake where he has a bad game. There are very, very few. I think that’s one of the things that makes him a great quarterback. He has a great arm. He has a great touch. He is precise. He helps the team win. He does the things they need to do to win. He makes plays that there aren’t many guys who could make. But he doesn’t try to do it all the time and he makes good decisions. Certainly, he is very protective of the ball and the functioning of the attack. And he has a lot of freedom he should. He makes a lot of good decisions.

Q: Complementing Aaron Rodgers as good as the Packers have been for a long time, it’s only three games. What did they show you situationally? Right from the field position game, you referenced Rich Bisacci on the special teams.

BB: Yeah, well, they lead the league in field position. Defensively, they are no more on the field than any other team. I think it’s two things. First, do not return the ball in attack. And two, having good coverage in the kicking game. They have three very explosive cover players, and a good core, and good specialists, and a good returner, and a good coach. So they made a good core group. So they’re probably better than when we looked at them last year in the offseason. I think they definitely improved that. They played well. They can rush. They can come back. They can cover. And they can protect. So that’s what hurt them last year in the playoffs, a basket. Protection is better. I know Rich [Bisacci] is and has been one of the best special teams coaches in the league. We saw it in Oakland. Whenever it was. Two years ago. Three years ago. Anything. Always had a lot of respect for Rich [Bisacci] and the work he has done. He is very thorough. Aggressive. His units are still playing well. And his team played well last year in Oakland, so yeah.

Q: Coach, what do you see the way they stretch defense horizontally on offense with bootlegs and stuff like that?

BB: They attack every inch of the field. They stretch it horizontally. These backs are really good. It’s as good of a back combination as we’ve seen, both of these guys are tough. They are good at the running game. They are good at the passing game. They do a lot of work themselves. Read the blocks very well. Put the blocks in place. They are difficult to approach. Aaron [Rodgers] uses them well in the passing game, but he uses everyone well. It’s hard to cover all five guys. He always finds the right guy. The guy with the least coverage. The guy with the best leverage. Whichever model happens to go. They attack the width of the field. They attack vertically. They attack on the ground. Everyone is at the point of attack defensively. There is no play when the quarterback has the ball in hand. He can throw it anywhere when those backs have it. Better be ready to defend them anywhere. At the point of attack, rebound, reduce. Be ready to face them. They run hard. They break a lot of tackles. They are tough. [Aaron] Jones is tough.

Q: In your career, what makes a team better at not turning the ball over as the season progresses? What kind of things do you need to focus on? What is the role of coaching? How much of a mental part is that? Physical part?

BB: I mean there are contact plays that are contact plays, but the safety of the ball is the responsibility of the people who have the ball. And the execution of the parts. If the quarterback gets sacked because of a missed block or a mental error on protection or something like that, it’s not really the quarterback’s responsibility. There are a few of these contact plays, but generally speaking, if you have the ball, you need to secure it. We haven’t done a good enough job of that. So training, playing, responsibility and accountability, we all did a better job.

Kabral, Kufour and others honored for their contribution to press freedom