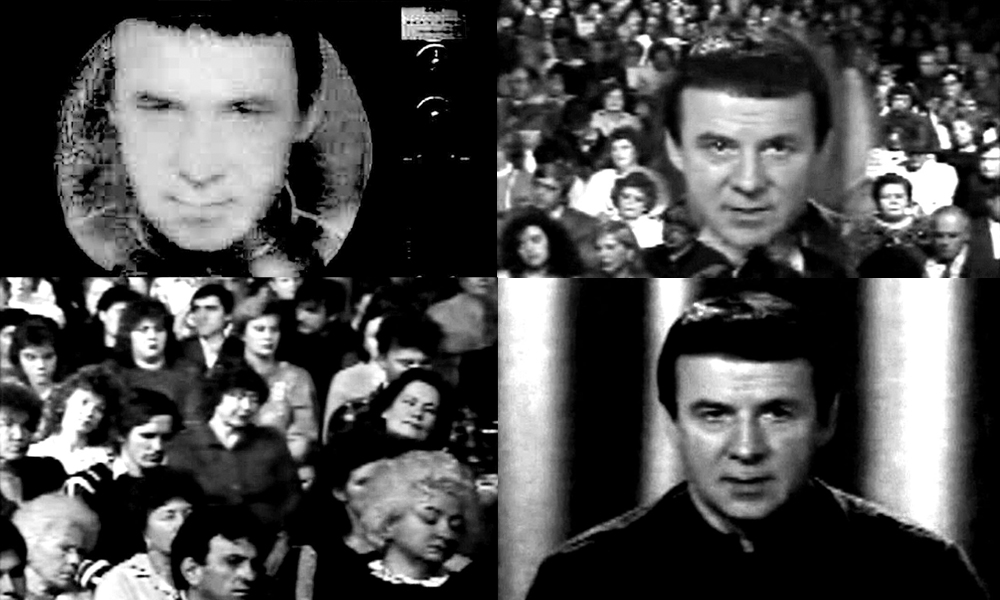 In October 1989, as the Cold War drew to a close, viewers in the Soviet Union tuned in to the first of a series of highly unusual shows.

The year that began with George Bush taking office as the 41st President of the United States proved to be one of the most tumultuous of the 20th century. ultimately, this led to the end of the Cold War. Millions of people gathered in front of their television sets to witness the political upheaval in the Eastern bloc: the dismantling of border installations between Hungary and Austria, inoperative checkpoints in Czechoslovakia and the dramatic fall of the Berlin Wall on 9 November 1989. The Tiananmen Square protests and ensuing massacre sparked fascination and then outrage around the world. In contrast, reports that Soviet troops were withdrawing from Afghanistan caused jubilation and cheers.

As long as the Soviet Union remained standing, another image prevailed there. Although Channel One also reported on earthly events, it drew the attention of viewers – in a country that still comprised 15 republics – to a series of transmissions that began with a first broadcast at 8:30 p.m. on October 8. 1989, immediately after the evening news.

“Relax, let your thoughts wander freely,” Anatoly Mikhailovich Kashpirovsky told citizens across the Soviet Union. Prior to this, the speaker – a licensed physician – had worked as a clinical psychotherapist for two and a half decades. For two years, he had also provided his services to the national weightlifting team. After the Seoul Olympics (1988) – dominated by the Soviet Union, which won 132 medals (including six gold medals in weightlifting) – Kashpirovsky’s psychic tweaks achieved popularity far beyond the realm of sport. . Now the adjustments he had made to the psychophysical apparatus of athletes would calm a turbulent country and heal the body politic by directing the minds of viewers to the new goals of the state.

Clearly, the reform policies – efforts to restructure the system with slogans of glasnost and perestroika – had failed to win over the public. It seemed that the population was slowly waking up from a kind of trance and starting to realize what had happened in recent years; in doing so, he came to recognize the gulf in living standards that separated the Soviet Union from the West, whose economic might controlled the world. Now, in this perilous conjuncture, a new force – not obviously political, but rather “therapeutic” – would restore the old state and would rally the individual forces constituting the collective.

The frame of healing

The evening after the first of Kashpirovsky’s six transmissions, 70,000 people marched in Leipzig chanting, “We are the people! It was the first large-scale demonstration against the GDR regime since 1953. But as the event prepared, millions of Soviet citizens sat in front of televisions as a supposed miracle worker prepared them to facing the future:

You can keep your eyes open for a while. Take a look at your surroundings. There should be no sharp objects and no fire. Your posture should be stable. If someone is seriously ill, for example suffering from epilepsy, please do not attend our session; just turn off the TV.

The first footage of the 20-minute session showed Kashpirovsky speaking in close-up. Then the image moved to the site where the events were taking place. Kashpirovsky stood on the podium of a cinema, delivering his therapeutic message to delighted viewers as lilting musical tunes filled the room.

The iconography of the third and last sequence brings out the political dimensions of the session. As the camera pans across the movie theater, the hypnotist’s face fades into and above the image. The effect was grotesque but sublime: like Leviathan, the sea monster of religious philosophy embodying the power of the state in the political theory of Thomas Hobbes. The effects were also not meant to be limited to the sphere of images. By imbibing “charged” water, viewers were told they would feel the effects of the therapeutic session until the next transmission. At the start of the show, Kashpirovsky asked people sitting at home to have a container filled with water handy; drinking it would revive the unconsciousness of the land, which had fallen ill, and infuse the aims of communism once again into the popular mind.

Kashpirovsky’s third transmission was on November 5; the fourth occurred two weeks later. Between the two screenings – Friday November 10 – Channel One reported that the Berlin Wall had been opened the previous evening. Before and after this momentous event, audiences across the Soviet Union tuned in to be rewired and receive “star messages” so that their failing picture of the world could once again be brought into focus.

In the interference of a network where the symbolic, systematic and rhetorical organization of data and information is played out, the specifically Soviet mode of historiographical representation is exposed: a coupling of material and immaterial practices intended to feed businesses Cold War corporatists. . At the end of this confrontation of two systems, East and West – each of which coordinated for strategic purposes the opinions gathered from the public – the people on the Soviet side sat down, absorbed in a television seance: a miracle cure, a technologically induced intoxication to stem doubts and banish secret thoughts into the “iron cage of the unconscious”. Kashpirovsky’s transmission represents the last effort of Soviet power to initiate citizens into the mysteries of the communist apparatus in the process of disappearing.

Wladimir Velminsky is Head of the History and Theory of Media Regimes in Eastern Europe project at the Department of Media Studies at Bauhaus University Weimar. Previously, Velminski worked at Humboldt-Universität zu Berlin, Universität Zürich and ETH Zürich. This article is excerpted from his book “Homo Sovieticus: Brain Waves, Mind Control, and Telepathic Destiny”.