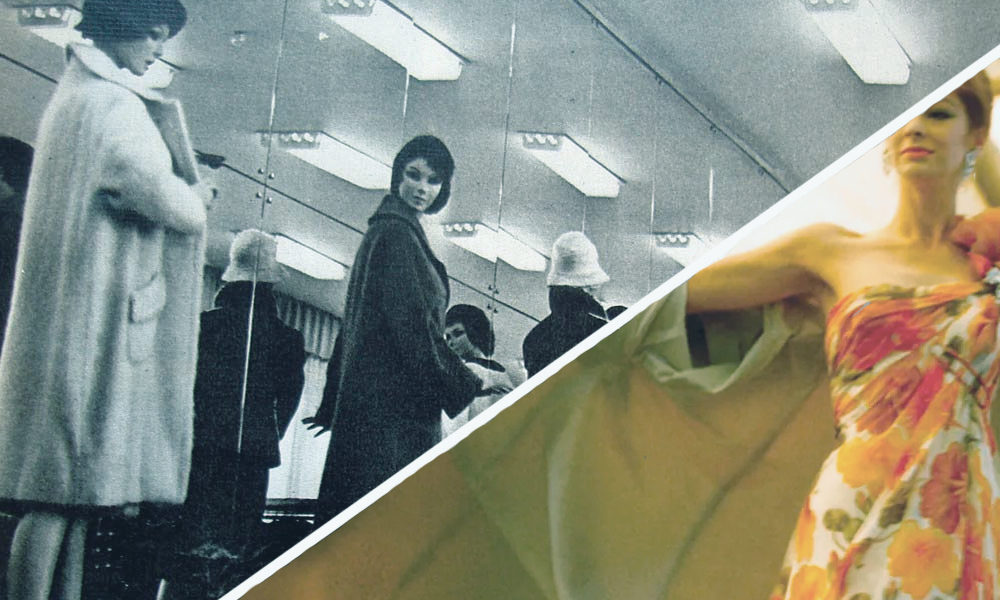 The Russians may have won the space race in the 1950s, but they couldn’t hold back the sophistication of Western dress.

In the late 1950s, having fired the first shot in space warfare, Soviet President Nikita Khrushchev extended competition with the West to everyday culture and way of life. Thus, in the summer of 1959, the Cold War shifted to the realm of cultural exchange. The Soviets held an exhibition of their scientific, technological and cultural achievements in New York, and the Americans followed with their own national exhibition in Moscow. Russians and Americans have tried to show off their finest clothes at every opportunity. The official repositioning of the fashion phenomenon in socialism is therefore part of a struggle for cultural supremacy.

US Vice President Richard Nixon and his wife Pat traveled to Moscow to open the American National Exhibition. Ahead of their visit, Pat Nixon carefully picked out a new wardrobe, as Newsweek reports:

A natural raw silk suit, a brown silk taffeta cocktail dress, a silk and cotton flower print dress with jacket and two other dresses. Most of her clothes were purchased from Henry Bendel in New York City where Pat spent an hour and several hundred dollars. â€œThese are costumes,â€ she explained. â€œDresses with flared skirts for the most part with matching accessories to create an ‘image’. It’s not haute couture and it’s the kind of thing that I love and think suits me the best.

At the opening of the exhibition, together with her husband and Soviet Deputy Prime Minister Frol Kozlov, Pat Nixon shone in his natural silk suit and elegant hat. She looked exactly what she was meant to have: like a sophisticated, well-heeled American housewife. The message was clear: The Russians may be ahead of the curve in space research and education, but they can’t compete with the sophistication of Western clothing and the easy gentleness of an American lady going about her daily life.

During the exhibition, American fashion was presented in four thirty-five minute parades that took place every day, each of which brought together three thousand to five thousand Russians. The Soviet authorities had opposed many American proposals for the exhibition, but the Russian public eventually got a chance to enjoy the American fashion shows, which included youth wear, casual wear, daily sets and long formal evening dresses.

In an attempt to bring Russians “a living slice of America,” the outfits were presented by professional models as well as children, teens, grandparents and entire families. Newsweek described the fashion show as boring, but acknowledged the political significance behind the clothes: â€œThe dresses were fine, although a little boring,â€ they reported. “The idea behind it was to show the people of the Soviet Union how the average American woman dresses for work and play – not the glamorous Park Avenue girl, but the young matron from Main Street.” The choice of mass-produced everyday American clothing was very powerful propaganda. If sophisticated outfits from New York fashion shows had been shown, they could easily have been attacked as elitist clothing intended for the exploiting class. But Americans knew only too well that the Russians couldn’t compete in decent mass-produced clothing.

As fashion contributed to the huge propaganda effect of the US National Exhibition in Moscow, the US media commented on the shortcomings of the culture of Soviet everyday life at the Russian exchange exhibition which took place only two months earlier at the New York Coliseum. “The Soviet exhibition strives for an image of abundance with an apartment that few Russians appreciate”, reported the New York Times, “with clothes and furs you rarely see on the streets of Moscow.” The fashion show included in the exhibit drew ironic comments from Western journalists. Five female models and one male model display designs by Soviet fashion designers from Moscow’s GUM department store and the Dom modelei, or House of Prototypes, an institution created by Stalin to produce prototypes for socialist fashion. Time magazine reported that “textiles, mostly thick woolen, thick-textured suits, are more impressive for their usefulness against the Russian winter than for their styles, which are clumsy attempts to copy Western patterns.”

Although the American media referred to GUM’s outfits as “clumsy copies,” they were in fact the most prestigious representations of Soviet elegance. In 1956, the general manager of GUM, VG Kamenov, wrote a booklet detailing the services offered by the Soviet flagship department store. Fashion workshops for bespoke clothing and specialty stores selling natural silk, artistically hand-painted silk, women’s hats, fur coats and perfumes were meant to present an idea of â€‹â€‹abundance and sophistication. In the illustrations accompanying the text, attentive salespeople have been shown offering customers these traditionally luxurious products. One section of the booklet dealt with new sales techniques, while another praised the fashion salons within the store, which offered one-on-one service in lavish surroundings.

The interior of the store, filled with dark carved wood furniture, crystal chandeliers, and heavy velvet curtains, was similar to the Stalinist concept of consumer palaces of the 1930s. The store pursued an outdated and grandiose aesthetic that promoted the mythical Stalinist concept of luxury. But this Stalinist glorification of reality, which attempted to eliminate all conflicting and erratic elements from everyday life, could not compete with ordinary life in the West. Thus, with the opening of the Soviet Union to the West, the disjunction between the deprivation of everyday life and its ideal representation became glaring.

By the late 1950s, in comparison to the efficiency of American department stores and the variety and quality of mass-market products they offered, GUM had become outdated and provincial, as painfully revealed by direct contact with the West. The August 1959 cover of Life magazine showed that the fashion war was fought even at the highest diplomatic level. Flanked by Ms Mikoian (on her left), Nina Khrushcheva (on the right) and Ms Kozlova (on the far right), Pat Nixon appeared as an elegantly dressed upper-class American housewife. The cover of Life magazine was a visual testament to the inability of the wives of Soviet diplomats to match the sophisticated, worldly style of Pat Nixon in her flower-printed silk dress, pearl necklace, and carefully applied makeup, as well as her slender figure. figure. Accompanying their husbands, the ladies attended a conference dinner at Khrushchev’s dacha, or country house.

There were significant visual differences between the wives of the three Soviet politicians, indicating their different levels of sartorial awareness. Nina Khrushcheva was dressed in the simplest dress, buttoned on the front. Called khalat, this style had become a domestic uniform of Soviet women. The women wore khalat at home, whether it is to go about their household chores, cook, rest or have fun. Ms. Mikoian was dressed in a more demanding attire: a suit, with a cut that discreetly shaped the body. His costume was modest, but his proletarian asceticism was softened by a small hat. This fashion detail showed some investment in her look, transforming her simple suit into an outdoor outfit.

The ceremonial dress worn by the wife of Soviet Deputy Prime Minister Frol Kozlov showed a full awareness of the importance of the occasion. Ms Kozlova’s evening dress, embellished with embroidery around the neckline, as well as her embroidered chiffon stole, white evening bag, white gloves, hairstyle and makeup showed a new attitude towards the fashionable dress. But Ms. Kozlova could not yet match the sophistication of Western clothing and the easy softness of an American lady of the same social rank. The ideologically informed rejection of fashion history was even more imprinted on Ms. Kozlova’s dress than on Ms. Mikoian’s simple costume or Nina Khrushcheva’s symbolically charged dressing gown.

Ms Kozlova’s appearance not only recognized contemporary formal Western dress, but broke an important socialist dress code. The most prominent members of the political bureaucracy or the nomenklatura had always dressed modestly in public, a practice that began with the Bolsheviks. Stalin and his political circle had also remained faithful to the proletarian ideal of modesty in their public appearance, although their private lives were loaded with all the symbols of traditional luxury, from fur coats to household helpers to furniture. ancients and gastronomy. Former Bolshevik wives Nina Khrushcheva and Ms Mikoian adhered to the long-standing dress code of the nomenklatura. Recognizing that times were changing, Ms. Kozlova however dared to transgress it.

Djurdja Bartlett is a lecturer in Fashion Stories and Cultures at the London College of Fashion, University of the Arts London, and author of “FashionEast: the specter that haunts socialism.“