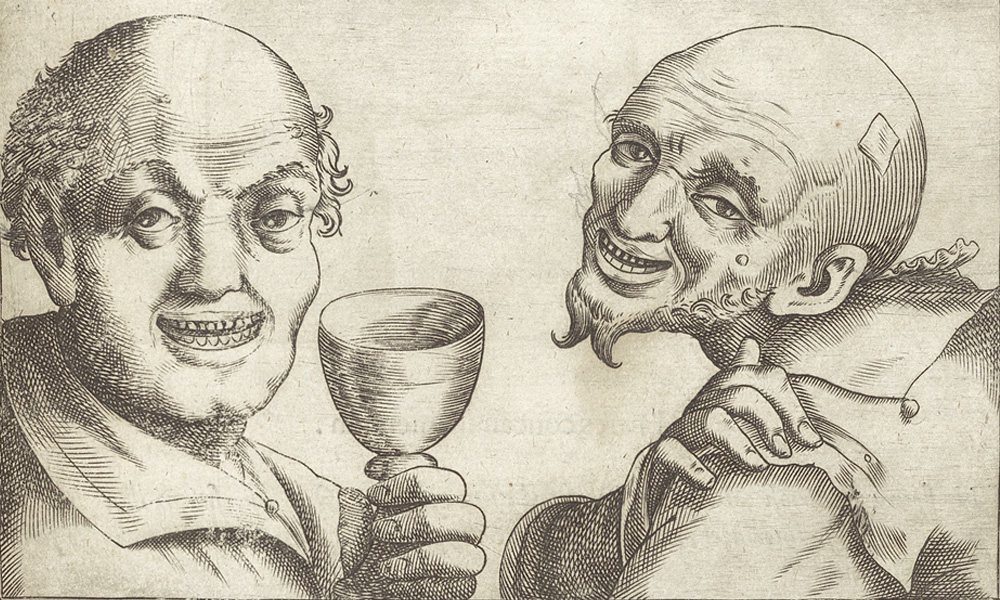 We are in 1579. After having kept the manuscript in a drawer for 20 years, Laurent Joubert publishes his “Treatise on laughter”. Its objective: “to leave nothing aside on the unusual subject”.

The treatise is a modern encyclopedia of early laughter topics. Trained in the tradition of humanist medicine, Joubert begins by sketching a fictional contest between the parts of the human body. Which is more important? Which one can stand on its own? An obvious candidate claims the title: the hand. Joubert recognizes its merits but soon dismisses it. After all, the brain commands and the hand obeys. The brain takes the lead in the competition but does not reign for long. Another competitor appears and wins: the face.

Only man has a face; animals no. We carry it high, looking up to the sky, proud; the face is the mark of our verticality. It is the place of social interaction – face to face – and therefore cannot be covered by hair or clothing. It is the seat of beauty; art is content to represent the face as the mark of an individual. It is the mirror of the soul; passions are visible on the face; disease too. The kiss is of the face, and therefore of love. The face is particular but the face of Marguerite de Navarre, to whom Treaty is dedicated, is also, according to Joubert, the face of the French nation. But above all, what distinguishes the face is its status as the throne of laughter, and Joubert agrees with the premise that laughter makes us human; laughter is “the effect of the most human passion there is”. As such, laughter will be primordial in the modern history of the face, which one could say began with the help of Joubert. The face and laughter come to be defined: man is the only animal that has a face, that is why he laughs; and man is the only laughing animal, which correlates directly with his face.

What is laughter? Joubert’s catalog of definitions takes us back to a materialism long forgotten today. Laughter is “trembling and noise”; “a sound-producing movement”; “a movement that stretches the muscles of the face”; “the dilation of the parts of the mouth and face.” In laughter, “the chest quivers, the lungs produce an interrupted sound, the mouth opens and the lips fold”. To the question: What does laughter look like? Joubert gives a complex answer:

Everyone can clearly see that in laughter the face moves, the mouth widens, the eyes sparkle and cry, the cheeks flush, the chest heaves, the voice breaks off; and when it lasts a long time, the veins in the throat expand, the arms shake and the legs dance, the stomach contracts and feels considerable pain; we cough, we sweat, we pee, we get dirty from laughing, and sometimes we even faint because of it. It doesn’t need to be proven.

Laughter is a convulsion of the face. It involves a specific constellation of facial functions: mouth, eyes, cheeks, voice. When laughter becomes a matter not of a single burst but of a series of bursts (“when it lasts a long time”), it also involves the rest of the body – arms, legs, belly, chest, throat veins . The body laughs. Extreme physiological changes can occur, as one may feel pain, cough, sweat, pee, get dirty, pass out. The laughing body is a convulsive assembly, whose parts move and dance, refusing to form a whole. The laughing face bursts itself, his mouth suddenly stretches, his eyes sparkle, the color splashes his cheeks with shades of red.

Some men, when they laugh, sound like the whistles of geese, others like the grunts of goslings; some recall the sigh of forest pigeons or widowhood doves; others the owl; one an Indian rooster, the other a peacock; others pee-pee, like chicks; for others it is like the whinnying of a horse, or a haunting donkey, or a dog yelping or choking, some evoke the sound of carts with dry axles, others, gravel in a bucket , still others a pot of boiling cabbage; and some have still another resonance, apart from the gaze and the grimaces, so diversely diverse that nothing is parallel to it.

Laughter not only contorts the face into a grimace and convulsively shakes the body, but it also produces a certain sound that is difficult to define. Joubert describes the sound of laughter onomatopoeically; laughter sounds “like” the whistling of geese, the neighing of horses, the peep-peep of chicks or the hee-hawing of donkeys. Even when the laughter sounds like a pot of boiling cabbage or gravel in a bucket, the description speaks to Joubert’s reader’s ear; one is challenged to hear these sounds.

The choreography of the body in laughter is, however, only the outward manifestation of a passion. What hobby? The question seems simple, but it received a variety of answers, with a number of variables. For particular passions often coalesce into compounds, and particular chemistry is required to produce different compounds. Joubert offers a list: “The main ones are joy, pain, hope, fear, love, hatred, anger, pity, shame, impudence, zeal, envy or wickedness. They are also called passions, disorders or disturbances of the soul in that they come from an appetite which does not proceed from reason.

Among the passions on Joubert’s list, it is clear that laughter is a manifestation of joy. But things are not that simple. Like other early modern passion theorists, Joubert adds that the joy associated with laughter is of a special quality and is most often accompanied by other passions. For Joubert, laughter translates into a combination of joy and pain. The particular constellation of motion and sound we call laughter, that quivering noise and muscle movement, transcribes the workings of a mixture of joy and pain, expressing, in an Aristotelian vein, “a feeling for an ugly thing unworthy of pity”. Laughter marks the tension between joy and pain that we feel in the face of this ambivalent situation. The passions are located in the heart, which is why we say that we laugh “heartily” (he laughs heartily), but in Joubert’s account they are, or should be, governed by reason. That the human mind should be conceived as a republic and the republic as a human mind, Joubert knows from Plato’s “Republic”. Analogy is a commonplace in works on passions in the modern era. Reason must be sovereign in both; the prince must be an embodiment of reason, reigning over the passions of the people. The reverse is also true: the control of the passions gives political power.

Joubert tells us that there are two ways of governing: “one is as master, where one simply commands; the other is civil or political, where obligations are recalled with authority. Reason governs the heart in the second way when, with its counsels, it moves or calms the emotions, and if the heart resists the bit, reason has recourse to the first means, by which it can command the outer members to do what ‘she wants. In other words, reason first tries to calm the passions, to show them in which direction they should direct us. If the passions resist the authority of reason, reason resorts to another maneuver, ordering directly “outside”, the body and the face, not to follow the movement of a given passion. Joubert believes things stop there and there is no need for what Erasmus identified as the government’s last resort, censorship: covering your mouth with a towel or your hand.

Yet it seems that sovereign reason is often at a loss when faced with laughter:

These are among the great wonders of laughter, how it escapes so quickly that it seems to be coming without our knowing it, almost sneaking in, and how sometimes, letting the laughter wash over us, we can neither stop it nor delete it. For when we laugh until we part [nous rions à tout rompre]carried away by cachinnation [amportés du Cachin]it is not in our power to close our mouths or to breathe at will, so that, for lack of air, we sometimes almost choke.

Laughter seems to obey reason less than any other passion. Rebellious, he sneaks in and dominates reason. We can’t control our laughter, Joubert argues, just like we can’t control our bladder. Laughter “bursts” us, “breaks” us and “divides” us.

Not all laughter is the same, and not all pose the same threat to reason and its governance. What is needed is a typology of laughter, instrumental in the acquisition of “know how.” There are two basic types of laughter. The first is modest; it is small, natural and healthy. The second and problematic is cachinnation (the mess); it is bastard, illegitimate and unhealthy. Cachinnation is an umbrella term for “immodeous, excessive, insolent, and overlong” laughter. The mouth, which shows a medium opening in a modest laugh, gapes indecently. While chaste laughter is the laughter of the Aristotelian definition, cachinnation eludes it. In the latter case, the same constellation of movements and sounds occurring in modest laughter cannot be attributed to anything ugly or inappropriate but unworthy of compassion. Tickle laughter and baby laughter fall into this category. The so-called “dog laugh” (the rice-dog) belongs here too.

Cachinnation, Joubert argues, borders on madness. It can be caused by castration, poisonous bites or epilepsy. Several epithets define unhealthy and bastard laughter: sardonian, canine, ajax, catonian, ionic, inept, tumultuous, asbestos. Modest and wholesome laughter needs no epithets, it is simply called laughter. The language slowly got rid of most of these epithets, as we slowly learned to laugh at our modest chuckles, which we came to call “laughing.” The very word “cachinnation”, widely used in the early modern period, is slowly fading away.

Modest laughter is to be encouraged, because it acquires therapeutic qualities. A long tradition in the history of medicine pursues this idea. Laughter is a cure for a variety of health issues, heart disease in particular. In fact, not laughing is worrying for Joubert. And there are people who are not laughing: “those who give themselves entirely to study and contemplation, or to some great enterprise, are almost all hard age, sad, rude, stern and frown. It is not difficult to discern here the figure of the philosopher with frowning eyebrows. At the other end of the spectrum, children and young people laugh more. Women too. While modest laughter has its obvious benefits, cachinnation is dangerous. It makes you effeminate. It makes you fat. It causes fainting, coughing and choking. You can even die laughing.

Anca Parvulescu is a professor of English at Washington University in St. Louis. She is the author, among other things, of “Laughs: notes on a passion”, from which this article is taken.