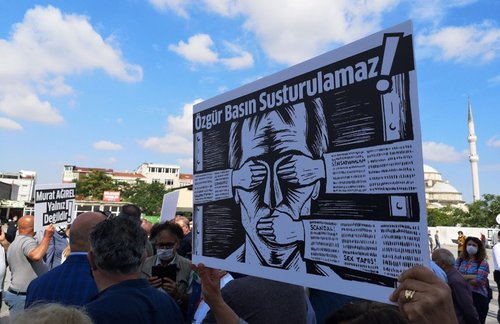 “The free press cannot be silenced!”

Noting that journalists have certain rights and a chance to live even in countries with a minimum of freedom, the DFG expressed concerns that this is not the case in Turkey: â€œObliged to transmit the truth to people, journalists face various obstacles while fulfilling this duty. Each month, we prepare our report dreaming of a country where the pressure and obstacles against journalists diminish or disappear completely; however, with each new report, we unfortunately see that the situation is getting worse by the month. “

Referring to new legal amendments about to worsen press censorship, the report said: â€œWe know very well what kind of destruction will be caused in this area by the motion which should be brought to the agenda. parliamentary and contains provisions on digital media. With the previous legal provisions, journalists and the media have remained almost speechless. The new provision to be introduced will further aggravate the situation. “

“The most striking violation: censorship”

DFG shared the following findings in its report:

State of pressure on journalists

Noting that there are still several journalists behind bars and that they are getting their share of the rights violations taking place here, the DFG called for an end to the violations faced by jailed journalists.

Freedom of the press, Belarusian opposition or Greta for the Nobel Peace Prize?