CCTV: On July 11, State Councilor and Foreign Minister Wang Yi delivered a speech at the ASEAN Secretariat, calling for maintaining peace, independence, development and inclusiveness, and to the resolute practice of open regionalism. Can you share some details about it?

Wang Wenbin: Yesterday, State Councilor and Foreign Minister Wang Yi visited the ASEAN Secretariat and delivered a speech on China’s proposals and suggestions on deepening China-ASEAN relations and promoting Regional Peace and Prosperity, which was warmly welcomed by ASEAN Secretariat officials and participants. of the event.

State Councilor and Foreign Minister Wang Yi reviewed the extraordinary development path taken by China and ASEAN since the establishment of dialogue ties 30 years ago, especially the results of cooperation most encouraging, touching, uplifting and gratifying highlights of China-ASEAN relations over the past 10 years. years thanks to the strategic guidance and personal commitment of President Xi Jinping and the leaders of the ASEAN countries. Between China and ASEAN, relations have been maintained in many areas. China and ASEAN stand together to fight COVID-19. Economic cooperation and trade flourished. Security cooperation is progressing steadily. Wang Yi noted that this year being the first year for building the China-ASEAN comprehensive strategic partnership, China will continue to uphold the centrality of ASEAN, call for Asian-style settlement of disputes, firmly pursue its open strategy of development, will resolutely advance cooperation in science, technology and innovation and advance Asian values, so as to write a new chapter of regional cooperation and Asian revitalization.

Wang Yi pointed out that there are two completely different trends regarding Asia’s future. One advocates open regionalism, genuine multilateralism, a development-oriented approach and mutually beneficial cooperation; it aims to help countries in the region emerge from the pandemic and achieve comprehensive development as soon as possible. The other pursues a relapse into the outdated Cold War mentality and closed group politics, and ranks the countries of the region according to their values; it tries to divide the regional economy into different blocks and even to apply NATO’s approach to Asia-Pacific security. China’s choice is to join forces with ASEAN members and other countries in the region to adhere to the vision of peace, development, independence and inclusiveness, firmly uphold the open regionalism and, drawing on the experience and wisdom of Asian civilizations and practices, constantly add new dimensions to open regionalism. We must always uphold the concept of peaceful coexistence, the goal of development and renewal, the principle of independence, and the spirit of openness and inclusiveness. Together, we will build a common homeland that enjoys peace, tranquility, prosperity, a beautiful environment and friendship.

While answering questions from the press after his speech, State Councilor Wang Yi stressed that both sides of the Taiwan Strait belong to one China. Taiwan is part of Chinese territory. Although the two sides have opposed each other politically for a long time, China’s state sovereignty and territorial integrity have never been divided. This is the true status quo of the Taiwan issue. Stability across the Taiwan Strait is underpinned by the one-China principle, which is part of the post-war world order. The more we unequivocally uphold the one-China principle and the stronger our measures to contain and prevent separation, the more likely they are to ensure peace and stability in the Taiwan Strait as well as peace and prosperity. In the region.

Bloomberg: A question regarding William Lai, the Taiwanese ‘vice president’, who traveled to Japan to attend the funeral of former Japanese Prime Minister Shinzo Abe. He is the most senior official to visit Japan from Taiwan in decades. Does the Chinese Foreign Ministry have any comments on this visit?

Wang Wenbin: I have to correct you first. Taiwan is part of China. There is no so-called “Taiwan Vice President”. After the sudden and unfortunate death of former Prime Minister Shinzo Abe, Taiwanese authorities sought to engage in political manipulation and political advantage by profiting from the incident. Their political calculations will not succeed. The Chinese side has made solemn representations to the Japanese side in both Beijing and Tokyo and made our position clear.

Xinhua News Agency: Vice Premier Han Zheng and Frans Timmermans, Executive Vice President of the European Commission, recently held the third high-level dialogue on environment and climate between China and the European Union. Could you offer more information on the dialogue? What are China’s specific plans for cooperation with the EU in areas such as climate response and the transition to green and low-carbon energy?

Wang Wenbin: In September 2020, President Xi Jinping held a virtual meeting with the leaders of Germany and the EU. The leaders agreed to establish a China-EU High-Level Environment and Climate Dialogue (HECD) and forge a China-EU Green Partnership. To act on the leaders’ common understanding and work for solid and substantial progress in the China-EU green partnership, Vice Premier Han Zheng and Executive Vice President Frans Timmermans hosted the first HECD in February 2021 and the second. in September 2021, after which they issued a joint press release. During the third HECD held earlier this month, the two sides had an in-depth exchange of views on green and low-carbon development policies, the current cooperation between the two sides on environment and climate. and prospects for future cooperation, jointly advancing the multilateral process. , and matters of common interest. The two sides agreed to strengthen dialogue and cooperation and foster new areas of cooperation in areas such as energy security, green energy industry, energy technology innovation, carbon market, biodiversity protection, chemicals management, green transport, green financing, green buildings and zero-waste cities. 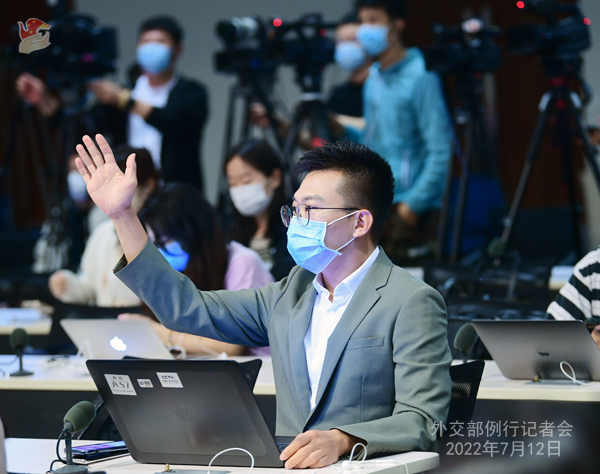 Beijing Daily: On July 11, Hanscom Smith, US Consul General in Hong Kong, criticized Hong Kong’s national security law in his farewell remarks, saying, “By restricting political and social freedoms, the RPC will inevitably undermine the attributes that have allowed Hong Kong to develop as a global service hub”; “diplomats have even been threatened by the national security law”. The United States does not support Hong Kong independence, but hopes that China will grant Hong Kong the autonomy promised by China. What is China’s comment?

Wang Wenbin: The Hong Kong SAR government has solemnly responded to this. We deplore and reject the baseless and hyperbolic remarks by the US consular official in Hong Kong that have distorted China’s policy in Hong Kong and distorted Hong Kong’s political and economic landscape. Since the passing of the Hong Kong SAR National Security Safeguarding Act, national security has been safeguarded, life has returned to normal, and the rule of law and justice have been upheld. The lawful rights and freedoms of Hong Kong residents and foreign nationals in Hong Kong have been better protected in a more secure environment. One country, two systems, Hong Kongers administering Hong Kong, and a high degree of autonomy are all moving in the right direction. This is well recognized by all sectors in Hong Kong and welcomed by the international community. A survey finds that 76.2% of Hong Kong residents say their freedom and rights prescribed by the Basic Law are not affected after the implementation of the national security law and 63% of Hong Kong residents think that the national security law has improved the business environment in Hong Kong. These facts should not be distorted. The mainstream public opinion in Hong Kong should not be denied.

I would like to point out that China has provided necessary facilitation and support to foreign consulates in Hong Kong to perform their duties in accordance with law. In the meantime, foreign consulates and consular staff are required to respect and observe the laws in Hong Kong, including the National Security Law, as well as international laws and basic norms of international relations, including the Vienna Convention on Consular Relations. Any act or activity that interferes with Hong Kong affairs and other internal affairs of China, endangers China’s national security, and undermines Hong Kong’s prosperity and stability will not be permitted or successful.

Bloomberg: An economic adviser to the Sri Lankan government said in a Bloomberg TV interview that Sri Lanka is in talks with Japan and possibly China on the issue of bridge financing or bridge financing. Can the Ministry of Foreign Affairs provide an update on the talks between China and Sri Lanka on financial aid or debt relief for Sri Lanka?

Wang Wenbin: As we have said many times, China deeply feels the difficulties and challenges Sri Lanka is facing. We provided emergency humanitarian assistance, including food and medicine, to Sri Lanka. Through government-to-government and sub-national channels and through friendly organizations, China has provided several batches of various kinds of assistance to people from all sectors of Sri Lanka to improve their livelihoods. China will continue to do its utmost to help Sri Lanka’s socio-economic development, support its economic recovery and improve people’s lives.

Regarding Sri Lanka’s debts to China, China is helping relevant financial institutions to discuss with Sri Lanka and settle them properly. We are also ready to work with the countries concerned and the international financial institutions to continue to play an active role in helping Sri Lanka overcome the current difficulties, alleviate the debt burden and achieve sustainable development.

AFP: Japan’s foreign minister said William Lai was involved in relevant activities in a private capacity and that Japan’s basic policy towards Taiwan remains unchanged. What is China’s comment? 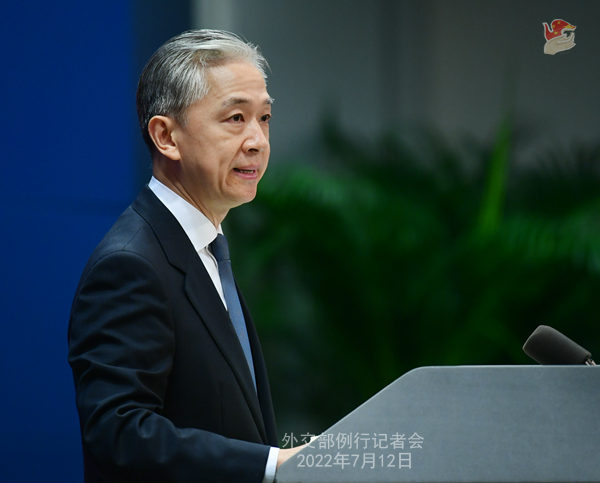