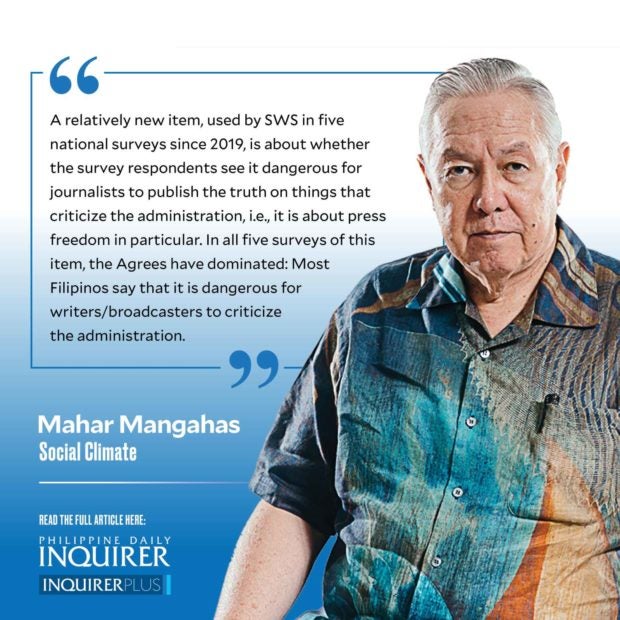 In its investigative questions dossier, Social Weather Stations presents two elements on the state of freedom of expression, as assessed by the Filipino people. The original element, first studied in Marcos’ final year, relates to the ability of the people themselves, represented by the interviewees, to speak openly and fearlessly about everything they love, even against the administration.

For this query, 33 percent agreed, 37 percent were neutral and 29 percent disagreed. I do not recall any other line of inquiry, at any time, where non-engagement was the most common response. The 33 percent agreement in 1985 was the lowest all-time record, after 41 repetitions under successive presidents.

In eight SWS surveys from Cory Aquino’s day, the percentage agreeing with this item ranged from 46 to 74, the highest in March 1987, after the Constitution was ratified. In three surveys conducted under Fidel Ramos, the range was 51 to 62; in eight surveys under Joseph Estrada, 57 to 62; in nine surveys under Gloria Arroyo, 47 to 61; in six surveys under Noynoy Aquino, 50 to 61; and in six polls conducted by Rodrigo Duterte, 59 to 65, the latest in November 2020. Few felt free to speak out against the administration below 50%.

Self-declared freedom to speak out against Duterte. This year, SWS revised the inquiry question by changing its last words to “laban kay Pangulong Duterte” (“against President Duterte”). The resulting agree-disagreement percentages were 38-33 in May 2021, 45-27 in June 2021, and 42-22 in September 2021. This puts the net agreement rate at a relatively low level of +5 in May; but it returned to +18 in June and to +22 in September.

Note that the change in the article is that it specifies the administration official against whom the criticism is directed. How to channel criticism is another question, considered separately and taken up again below.

The item asks if the respondent agrees (strongly / somewhat), feels neutral, or does not agree (somewhat / strongly) with the statement: “Mapanganib na mag-lathala / mag-print o mag-broadcast ng anumang kritikal sa administrasyon, kahit na ito ang katotohanan. (“It is dangerous to print or broadcast anything critical of the administration, even if it is the truth.”)

The national agree-disagree score for September 2021 breaks down into 45-28 in the National Capital Region, 46-18 in Balance Luzon, 47-16 in Visayas and 41-17 in Mindanao. So, most people all over the world, including in the presidential quarter, say it is dangerous for the media to criticize the administration.

Most people at all levels of education say it is dangerous for the media to criticize the administration. The agree-disagreement percentages for this indicator of press freedom, in September 2021, are 38-11 for primary school dropouts, 42-21 for primary school graduates, 47-18 for first cycle graduates of the secondary school and 49-21 for college graduates. (I consider education to be a more reliable indicator of social class than the ABCDE market research groups.)

Most people from north to south say it is dangerous for the media to criticize the administration. Most people from all walks of life say the same thing. In the past two years, people haven’t seen freedom of the press.

Responsible use of press freedom, Buhari accuses the media