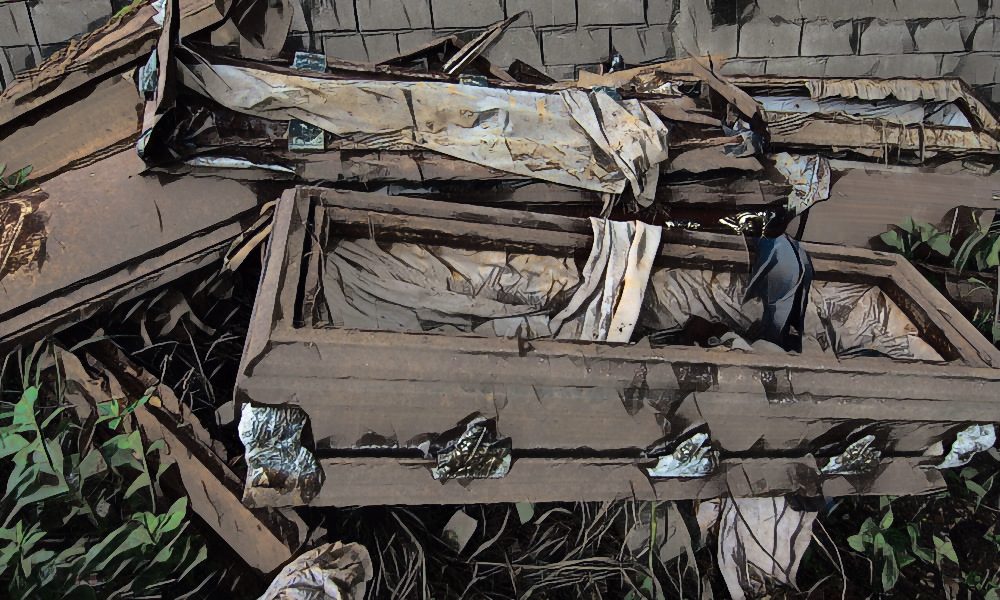 On the politics of death

Global events such as pandemics can momentarily draw attention to a fundamentally neglected pre-existing human condition: the sheer inequality of how those in power decide who lives and who dies.

Pandemics make it harder to ignore death. That doesn’t mean government officials and friends won’t symbolically look away or reflexively look harder at their phones during spikes in mortality. But the longer an act of ignorance continues, the more evident the avalanche of ignored death becomes.

Ignoring something is, of course, different from suppressing it. We acknowledge its existence by ignoring it. We see death. We understand that this happens. We all know people who have died. Anyone who reads these words will eventually die.

Which brings me to our present moment of death.

The Covid-19 pandemic is just one example among a long list of morbidity and mortality events that have momentarily exposed the politics of death for all to see. And by everyone, I mean the citizens of every country on the planet who are suddenly witnessing what those of us who work in death already knew: Our leaders routinely choose to decide who lives and who dies.

Now turn that last statement into a question and one can begin to see the genealogical shadow of queens and emperors: who lives and who dies? Thumbs up or down? These are fundamental and pressing questions that confront modern governments with choices to be made on any given day, but especially during a pandemic. The first AIDS epidemic remains a tragic illustration of how different governments decided that gay communities that watched gay men die in unprecedented numbers could be ignored until those same governments were suddenly faced with a pandemic that stay with us today.

Thanatopolitics or the politics of death

Who lives and who dies are clearly not new questions, but global events such as pandemics can momentarily draw attention to a fundamentally neglected pre-existing human condition: the sheer inequality of how those in power respond to these questions. .

And while it is correct to state that all biological creatures die at some point, this death is hardly universal in its impact on different communities. What I am saying might not come as a surprise, but it is important to highlight this information as a way to state that when we discuss death in the modern Western world, we often discuss the politics of death. the death. Even though people don’t realize this distinction when they talk about death and dying – and a lot of people, I believe, don’t – the ways in which end-of-life trajectories are discussed focus on the dynamics. at the origin of this death. This distinction is important because understanding how a person died – the leading cause of death, especially during a pandemic – is often fraught with political questions regarding access to care, medical ethics and economic stability.

This policy of death can be rightly qualified as thanatopolitique, borrowing thanato for the death of the ancient Greeks and working with Giorgio Agamben and Michel Foucault ideas around biopolitics and life forms.

What this thanatopolitics of who lives and who dies – with a strong emphasis here on the “dies” bit – isn’t the related concept of necropolitics. The latter is a distinct and important idea first suggested by the philosopher Achille Mbembe who more precisely describes the policy of corpses (the necro in ancient Greek). The thanato / necro distinction is crucial in everyday circumstances since the politics of death is often described using the prefix necro- – and although death and corpses are obviously linked, the politics surrounding each remain unique. and must be distinguished from each other. The politics of the corpse and the politics of death occupy distinct experiences for the average person, and recognizing the difference between what death is and what a corpse is remains deeply important to medicine, the law, and the taking of justice. daily decision in places such as hospices.

In my book “Human Corpse Technologiesâ€œI devote an entire chapter to discussing precisely these distinctions between organic, thanato and necro, since everyone’s politics remains both always visible (if we know where to look) and completely hidden. The manuscript for the book was completed in 2019, before Covid-19, but spends many pages discussing how AIDS both impacted and dramatically changed the way funeral directors treated corpses, for example, personal protective equipment or PPE, an acronym we all unfortunately know. with now.

By discussing the thanatopolitics of the early AIDS epidemic (which is still happening, lest anyone forgets), it is easy to see how the Covid-19 pandemic ticks all the boxes as to what contemporary thanatopolitics relies on: social and economic disadvantages that contribute to higher mortality rates, especially in brown and black communities; hundreds of thousands of people dying entirely preventable deaths in populations that become economically acceptable deaths (e.g., the elderly and disabled); access to life-saving medical treatments that significantly favor wealthy communities and nations, and so on.

Where Covid-19 thanatopolitics morphed into something I had not predicted was when the emergence of what I call virological determinism became the logic that almost every local, national, and global governing body used to lay blame for preexisting societal problems. This is a gloss on technological determinism, the tendency we humans have to blame any â€œtechnologyâ€ for causing our very human-created problems, and works much the same way. By taking a rapidly-out-of-control pandemic and mixing in contemporary health inequalities and unprepared â€” and sometimes negligible â€” political leaders, we in the West ended up in this thanatopolitical quagmire.

I say quagmire, since it is unclear right now if and when any of this will actually be â€œdoneâ€ no matter the speed with which people want to move on. But there are lessons to be learned, and in this way, thanatopolitics can be extremely productive and useful.

The politics of death become a way to acknowledge all those who died and what should be done in the future to prevent more needless deaths. One of those key lessons includes governmental leaders both knowing about pre-existing pandemic response plans and then using those plans when responding to a non-stop mass fatality event such as Covid-19. In addition to following the already extant response plans, leaders should continue to update and renew those plans on a regular basis. HIV/AIDS taught the world how quickly a virus could adapt to everything we threw at it. I remain hopeful that we reflect on that lesson in the coming decades.

On March 18, 2020, I flew on a plane from the UK (where I normally live) to my hometown in Wisconsin to help my parents with some health issues. I did not know it then, but this was one of the last planes to make that trans-Atlantic flight for many months due to the pandemic.

On the flight, I read an incisive essay by Michael Specter in the New Yorker on the cascading failures of the U.S. health care system. It ends with the following prediction that presciently understood the who-lives-and-who-dies thanatopolitics that defined the past 18 months: â€œThe bigger question is whether we will learn from the fact that this [Covid-19] pandemic will kill many more people than necessary. I would love to think we would, but, if the past is any guide, this pandemic will end with a bunch of new and disturbing commissions and reports. As soon as they are printed, they will be forgotten.

We can choose to ignore death and the thanatopolitics that this choice brings for future body counts. But if Covid-19 has shown anything, it’s that we do it at our own risk.

Jean Troyer is director of Center for Death and Society at the University of Bath and author of “Human Corpse Technologies. “