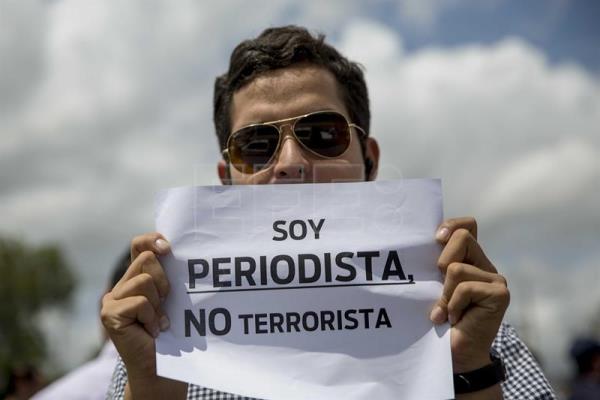 Nicaragua. Press freedom violations ‘must not be normalized’

Jorge Canahuati, president of the Inter-American Press Association fears that the measures taken by the Ortega regime against journalism will be copied by other governments.

HAVANA TIMES – The president of the Inter-American Press Association (IAPA), the Honduran Jorge Canahuati, noted that the recent official confiscation of the newspaper La Prensa, by the regime of Daniel Ortega and Rosario Murillo, is “one more step “towards silencing all the media in Nicaragua. A situation which, he warned, is embarrassing because it sets a negative precedent that can be replicated by other “undemocratic governments” in the Americas.

“There is no doubt that press freedom in our hemisphere has deteriorated over the past three or four years,” Canahuati warned in an interview with Tonight and the director of the Confidencial program, Carlos Fernando Chamorro. “Central America, in particular, is an area that has triggered our concerns”, because of cases such as Nicaragua or Guatemala, where the director of El Periodico, Ruben Zamora, is imprisoned. These situations may motivate other regimes to “take action against the media or freedom of the press”, he commented.

The IAPA President said that “organizations like ours should not hesitate” to express their “concern, denunciation or condemnation of these violations” of press freedom. “Nicaraguan journalism must be convinced that from IAPA we will continue to be present”, because “the worst thing that can happen is that it becomes normalized or forgotten”.

Last week, Daniel Ortega’s regime illegally confiscated the facilities of the La Prensa newspaper. What impact has this new attack on freedom of the press had on newspapers in the Americas?

This is really another step by Mr. Ortega to silence the media. Any journalist who censors himself and does not speak of a confiscated or closed media, the repercussions are significant. Firstly for Nicaragua, which is losing an important voice, and for Latin America in general because of a tendency that we have seen lately to harass, stigmatize and threaten the media, from the United States to Argentina and Chile. What is the biggest concern we are thinking about right now? It is that they become an example to follow for other undemocratic governments or those who want to silence their critics.

Last year in Venezuela there was also the confiscation of the newspaper El Nacional, which together with La Prensa are two emblematic newspapers, each in its own country. From the Inter-American Press Association, you have followed these crises. At present, what can be done with IAPA?

On April 19, the Inter-American Press Association and 27 global organizations released a statement on Nicaragua, in which we called for action to improve the state of journalism and press freedom in your country, ranging from asking countries to host journalists in exile, which already number more than 300 journalists who are not, to my knowledge, asking multilateral funding bodies to demand that freedom of the press or freedom of information be respected among the conditions for granting loans. We are not going to remain silent. We will continue to insist on denouncing these abuses, on denouncing all the illegal actions taken by the Nicaraguan government not only against journalists, but also against anyone who may have a dissonant voice, such as the NGOs recently closed down by the Ortega-Murillo government. .

Despite the confiscation of La Prensa, Confidencial, 100% Noticias and other media, we continue to do journalism from exile, spreading content through the Internet and social networks. How do you rate the international media coverage of the Nicaraguan crisis? Is there a fear that there is a kind of oblivion and normalization of this dictatorship in Nicaragua?

There is no doubt that this is real. I believe that organizations such as ours will not hesitate to present the denunciations. And this is our commitment. It should not be silenced. We must not forget that, as you so rightly said. SIP, not only in Nicaragua, but before any other minor or major expression such as the case of Nicaragua or Venezuela, will always be there to express our concern, our denunciation or our condemnation of these abuses. It is important to continue to be heard. You shouldn’t be forgotten. And I think that Nicaraguan journalism must be certain that from SIP we will continue to be present. But yeah, the worst thing that can happen is for it to become normalized or forgotten.

You mentioned the bad example that this demonstration of impunity imposed on Nicaragua by Ortega could have in other countries of the region. Are there any other specific concerns about threats to press freedom?

There is no doubt that for sensitive leaders [to criticism] or don’t understand the importance of having a vigorous and free press in their country… all of these aspects (abuses) that occur are examples. And, unfortunately, the global crisis left by the pandemic has had an effect, a feeling, that anything could happen, and governments are making decisions in which they were previously more cautious.

In Guatemala, (Ruben) Zamora, an emblematic journalist who in one way or another energized journalism in Guatemala. (Nayib) Bukele with his pursuit of legal actions against some of the most important newspapers (of El Salvador) or their main personalities. We have a threatened Peru. We have a Colombia in which the whole (electoral) campaign stigmatized the media. A (Jair) Bolsonaro still active in Brazil.

There is no doubt that press freedom in our hemisphere has deteriorated over the past three or four years. Less democratic or more dictatorial attitudes have emerged with the excuse of this crisis that we have had in the world about the pandemic. So Central America in particular is an area that has triggered our concerns. In the case of Zamora, an imprisonment that seems unjustified. A process in which they made a tailor-made raid on their facilities and so on. Yes, there is concern. There is no doubt that the enemies of freedom could use it as an incentive to act against the media or the freedom of the press.

How do you see the case of Nicaragua in the context of Central America?

I think what we are seeing is diplomatic hypocrisy. There is no doubt that the actions of the government of Daniel Ortega and Ms. Murillo go against not only the freedom of the press but also all freedoms. There is no doubt that in many countries governments come with a flag of denunciation and protection of human rights in the past, but when these cases occur, they go with what suits them. Yes, I would say that Central American countries need to do more. Society must demand more so that this cancer of dictatorial, abusive and repressive governments can act without consequences. I think the role of the media and associations such as IAPA is important and I hope that we can accompany them in raising awareness among the Central American people of the serious deterioration and the great threat that society faces from the deterioration of press freedom.

Russian journalist Safronov sentenced for another blow to press freedom