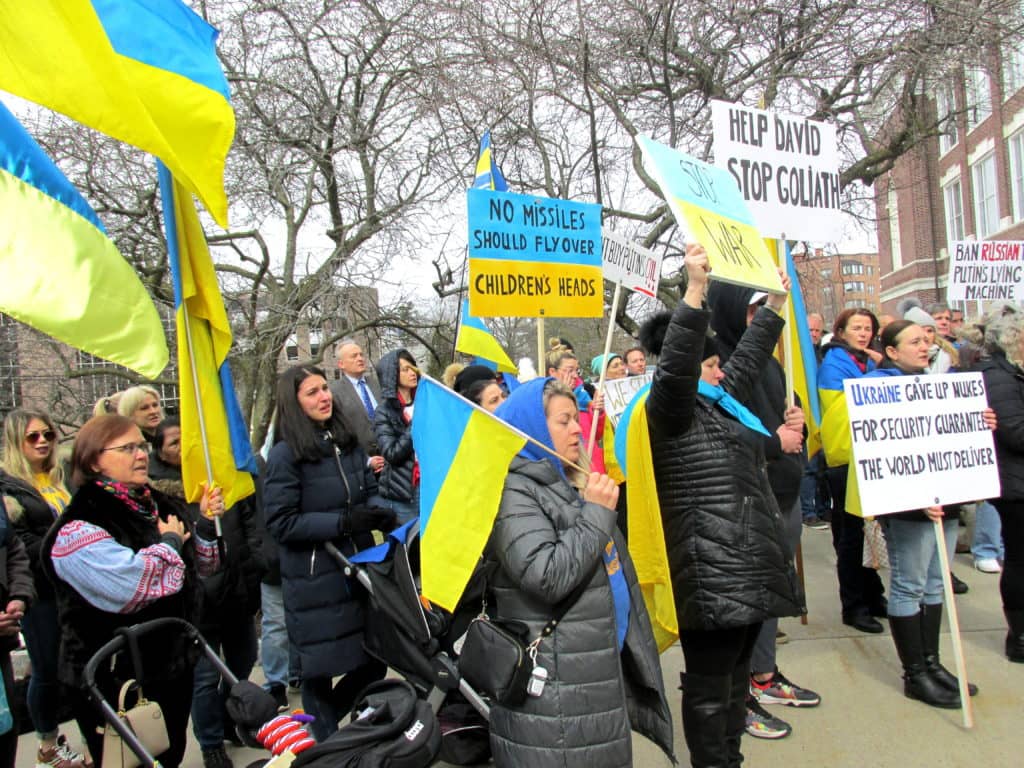 A burst of yellow and blue colors from the Ukrainian flag displayed by rally attendees beamed into a crowd of nearly 200 gathered outside Greenwich Town Hall at a midday press conference last Tuesday in support of Ukraine. Organizer Olga Litvinenko, former Miss Connecticut, USA 2017, a resident of Greenwich and originally from Ukraine, stood in her yellow Ukrainian coat before the rally.

“This situation that has escalated in Ukraine has been devastating,” Litvinenko began. “And we all looked and wondered what we could do to help all those fleeing Ukraine, currently stuck in Ukraine, and what can we do as Americans.”

To that end, Litvinenko had compiled an impressive list of state and local leaders to address the harsh Ukrainian realities ahead of the rally, including a zoom talk by Senator Richard Blumenthal speaking from Washington, DC.

Before her were protesters of Ukrainian descent from Greenwich and surrounding areas, as well as those who wished to stand up for the Ukrainian people in their desperate struggle to free themselves from the Russian invasion. Many of them shared with others why they were there.

“The reason we’re here is because we’re human beings,” said Joe Kantorski, who heads the Byram Neighborhood Association. “And we care a lot about people in Ukraine, and we’re all really connected.” Together with his wife, they both sang: “We all love peace.

Nearby stood a Greenwich resident of Russian descent who did not want to use her name. “These are my brothers and sisters – Russians, Ukrainians and Belarusians.” But now his country, Russia, was fighting against Ukraine. “So I’m totally against it. We are all devastated. And we don’t know what to do. People try to take to the streets, but they are stopped right away.

“I am the granddaughter of North Korean refugees,” state Rep. Kimberly Fiorello told the crowd.

“And all my life I’ve known freedom was at stake… The people of Ukraine don’t deserve the misery inflicted on them by Putin’s forces. I stand with all the citizens of Connecticut who are impressed by the determination of the Ukrainian patriots who are doing all they can to push back the violence.

To help stop Putin’s aggression, Fiorello offered: “The US Senate, which has jurisdiction over international affairs, has had multiple opportunities to sanction the two Northstream pipelines to break Putin’s hold on the European market for energy. And they failed to do so. It shouldn’t take a hot war to make something obvious.

State Senator Ryan Fazio spoke of the “bravery and patriotism” of the Ukrainian people. “Men and women too old and too young to fight… take up arms to defend their country. Fathers tearfully say goodbye to their children fleeing the country. He then testified to Ukrainian history.

“This year will mark the 90th anniversary of the Holodomor, where the Soviet Union under Stalin starved millions of Ukrainians during agricultural collectivization. Their country never gained independence until 1991. Yet the people of Ukraine are showing perseverance despite the historic crimes faced by their ancestors.

The co-host of the press conference was Dr Inna Lazar, an optometrist from Old Greenwich. Dealing with the invasion of her homeland has brought her to tears with the messages she receives. “People in Ukraine are absolutely horrified now. I have a lot of friends and family members who are still in Ukraine. Sorry, it’s very difficult for me to speak because I’m about to cry.
Senator Blumenthal spoke on-screen from Washington, DC, giving particularly fierce testimony about the plight of Ukraine. His description of Putin as “a thug” and “a war criminal” prompted an explosion of applause. He described current efforts in Washington to impose crippling sanctions on Putin and penalties on Russia, then added: “We need to do more.

Congressman Jim Himes wrote that he was focused on Congress and the Biden administration “to secure funds, aid and weapons for the people of Ukraine, as well as to impose severe sanctions on the economy Russian, shutting down their ability to bank or do business with the rest of the world.” He stressed the importance of working closely with our allies, “especially NATO and the European Union. Together, we have a much better chance of ending this conflict quickly and saving as many lives as possible. »

But it was Jaroslaw Palylyk, Chairman of the Ukrainian Congressional Committee of its Westchester branch, who shared the most urgent calls for what must be done to save innocent lives in Ukraine.

“NATO says a no-fly zone would be an unacceptable escalation with Russia. Is this policy still valid if Putin scales up like he did in Aleppo, Syria and Grozny in Chechnya, where he killed the innocent civilian population to take control of these areas…Are we going to wait for hospitals, maternities and orphanages to become destroyed?”

His pleas included: “Tell President Biden and the US government to stop buying Russian oil…We need to remove Russia from the UN Security Council…International courts must convict Putin and adopt procedures to convict Putin as war criminal and for crimes against humanity… We must stop Russian airlines, sea freight and other companies from using airports, seaports and international trade routes around the world… Media networks social must burn communications from Russia.

Finally, he called for a boycott of Russian products, such as Russian vodka. “To start, each of you today can go to a bar or restaurant you frequent and ask the owner-manager to remove any Russian vodka in solidarity with Ukraine and its people.”

The press conference ended with thanks from first coach Fred Camillo to Olga Litvinenko and Dr Inna Lazar, “and everyone who came here today”. He added: “When you are on your knees tonight or laying your head on the pillow, remember what everyone is going through in Ukraine.”

“And now,” Litvinenko said, “I will play the Ukrainian national anthem as we stand in solidarity with our flags and have a few silent moments of prayer and thought for Ukraine.”