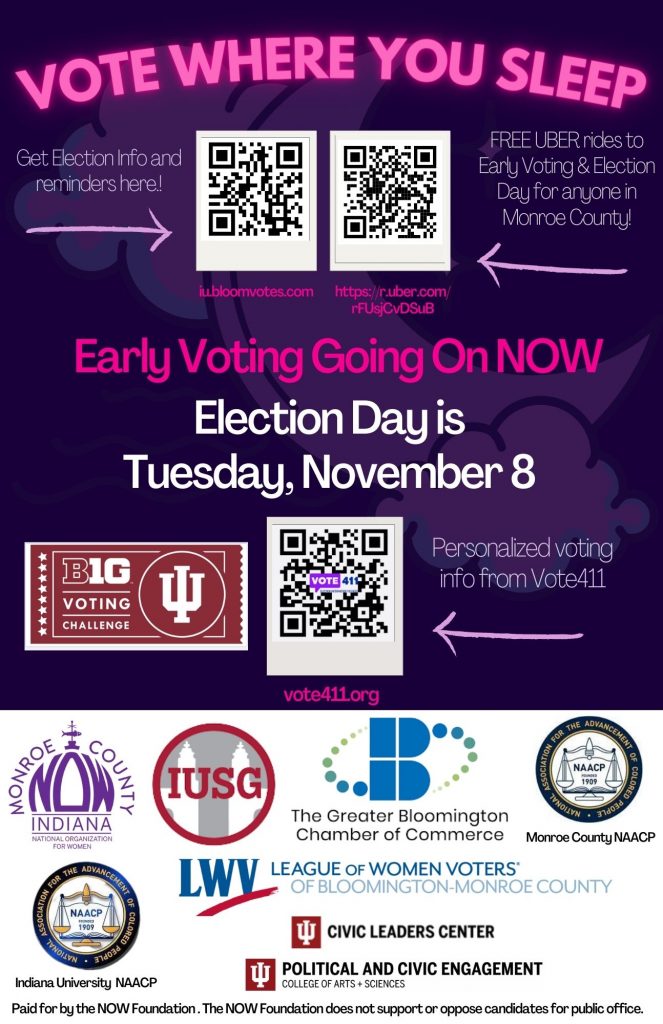 The following press release was sent to The Bloomingtonian on Friday:

FOR IMMEDIATE RELEASE (October 14, 2022)
BLOOMINGTON, IND. – A coalition of Bloomington-based organizations has partnered with UBER to provide free early voting and Election Day rides to any Monroe County resident using money donated by the National Organization for Women Foundation.

“We asked non-voters and students what the biggest barriers to getting out to vote were. Transportation and accessibility were top concerns,” said Monroe County NOW Chair Natalia Galvan. “We want to do everything we can to remove as many barriers to voting as possible.” MCNOW board members, along with Bloomington Councilman Steve Volan, began discussions regarding UBER last month, and details were finalized earlier this week.

Interested Monroe County residents are asked to use the URL: https://r.uber.com/rFUsjCvDSuB or the QR code on the consortium poster to access a free round-trip UBER ride to operations Elections at 302 S. Walnut St during early voting. Residents can also use the free UBER voucher to access their polling place on Election Day.

Just over 13% of Monroe County voters cast their ballots in the 2022 primary election held in May of this year. The majority of Bloomington’s low-turnout precincts are student precincts. The grant will allow the coalition to reach more potential voters ahead of midterm elections later this year. The coalition will also work with local businesses to place promotional material and create social media campaigns to raise awareness of the free rides.
“Students are no less concerned with the well-being of this community than non-students. We also know that students are practically discouraged from voting in local elections because so many people, students and non-students, think they don’t or shouldn’t count,” said Volan, who represents Bloomington’s largest student population in Bloomington City Council District 6. Efforts like these are designed to encourage students to bring their voices and concerns to the polls.

“We need to reach students, young adults and anyone who doesn’t vote where they are,” Galvan said. “We also need to be student-led. They know what they need; we just have to ask. The consortium of organizations is led by many student leaders and organizations, including IU NAACP and IU Student Government.

“I am one of 47,000 students here on campus, each with different assumptions about themselves. But every student has something valuable they can offer to our community. I believe that, when given the right opportunity and when taken seriously by older non-students, current students can use their voice to make a difference,” said Isabelle DeCastro, student leader of the ‘IU and Junior Alpha Chi Omega. DeCastro led an effort to enroll more than 50 students on Eagleson Avenue in a single day last week.

Early voting began on October 12, 2022. Election day is November 8, 2022. Those who register for the 2022 midterm elections will automatically be registered for the 2023 municipal primaries.
***
The Monroe County Chapter of the National Organization for Women is dedicated to intersectional feminism, fighting for constitutional equality, reproductive rights, freedom from violence, and social justice for all women. Established in 2017, it is one of Monroe County’s leading organizations working on these issues.

Like? Take a second to support The Bloomingtonian on Patreon!