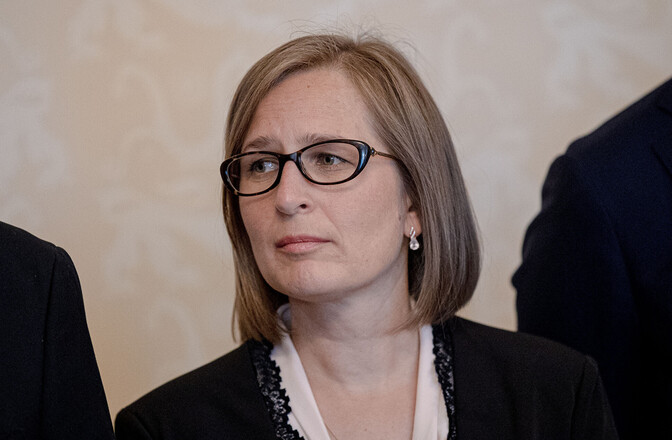 Minister of Justice: The legal order requires the same protection as the freedom of the press | New

Why did you decide to accept the post of minister?

It came as an intriguing proposition and I believe it will be a very interesting addition to my recent career. I directed [a ministry’s] Department of Population and Family Policy, has participated in the drafting of laws and can now participate directly in legislative policy in the Ministry of Justice.

What worries you on the pitch?

Because population topics have always been close to my heart and on which I mainly worked, I felt that demographic analysis was light or entirely absent from the bills. Since many laws have an impact on demographic processes, it is certainly important to consider these effects.

One idea I have and discussed with ministry officials today (Tuesday – ed.) is how to improve the analysis of effects, including the demographic aspect. We agreed to analyze the problem and look for solutions.

Weren’t you discouraged by your lack of political experience?

While it would be better to take on a ministerial assignment as a politician, I have seen politics and the work of a minister first hand since I headed the population and family policy department of the Ministry of Interior under Population Minister Riina Solman. We worked closely together as the domain had to be developed from scratch.

I’ve championed bills in cabinet and that’s nothing new. I also know the tools of the government, the various information systems and the so-called procedural meeting systems, as well as the organization of work. I will need to learn quickly in terms of being a politician. I’ve never been before, so I think it’s something I can work on.

I am sure you realize that although your position is one of great responsibility and importance, the time for ministerial work will be short in this government. Did your decision sport a longer time horizon than just until the spring election? Do you plan to become permanently linked to politics?

Hard to say. At the moment, I am working on what I have undertaken as Minister of Justice in the current cabinet. I won’t speculate on what the future will bring and will take it one step at a time. Everything will be revealed in due time. I focus on the management of the ministry today.

Does helping the party by standing for election as a minister make sense to you? Have you made the decision?

I haven’t decided yet, although we discussed it in the party. These calls will be made closer to the elections.

What is your most important task since Isamaa as minister?

The most important tasks are those on which the three partners have agreed in the coalition agreement. The latter includes its fair share of changes that will need to be coordinated by the Department of Justice. We can help streamline the passage of these bills and ensure they are of high quality.

This is our first priority. But I have already taken the time to get acquainted with the existing subjects of the ministry.

The government agreement gives priority to the draft law on family allowances. Where will he go from here?

Is the family allowances bill one of those where you see the need for an in-depth demographic analysis?

Undoubtedly. The demographic aspects were highlighted during [coalition] negotiations. The creation of the large family allowance in 2017 has contributed to families having more third children. There has already been a positive effect. Hiking that benefits is sure to add another positive boost. The analysis of the effects is necessary, and I assume that these factors and arguments will be included in the bill.

How would you describe your view of the world?

Because I am an Isamaa minister, it makes sense that I adopt a conservative worldview. My views largely coincide with Isamaa’s priorities, at the heart of which is the survival of the Estonian people, language and culture, as envisioned by our Constitution.

Your coalition partner and colleague, Interior Minister Lauri Läänemets (SDE) recently wrote the following on social media. “Officials are there to help and support people, find solutions, instead of regulating what surnames people can or cannot take.” It probably refers to giving same-sex couples the right to have the same surname. What is your position on this issue?

The coalition did not accept such a change. It is clear that the government will not address the issues on which the three partners could not agree.

All three [parties] have different views in different areas. I cannot tell you what my position would be if such a bill were tabled. We should discuss it in the evening.

The position so far is in line with previous changes to the surnames law which did not allow same-sex couples to take the same name.

How about the failure of the prosecution with the press?

I want to say first of all that having worked in journalism, I attach great importance to the freedom of the press. It is very important. On the other hand, I also understand the concerns of the prosecution. It would be a tragedy if the investigations stopped and people who deserved to be held accountable escaped any punishment because of the disclosure of circumstances or facts. We must try to find common ground and, in some cases, leave it to the court to decide whether the release of certain information is justified or would hinder the investigation. It’s up to the courts to decide.

Should the prosecution also look in the mirror to find out how and why this information reaches the press? Maybe they should tackle these potential leaks instead of accusing the press of doing their job?

I will refrain from passing judgment. The issue is complicated enough and I believe the courts must decide who was right and who could have done better.

What effect might punishing journalists for publishing such information have on press freedom?

If the punishment is justified, I’m sure the court can give an explanation good enough for everyone to understand that journalistic freedom may have been abused and the investigation hampered. For example, that the information could have been published later, etc. But each case must be considered separately. There is no universal solution. Freedom of the press must be preserved and I think it will be after this affair. (The Attorney General’s Office recently fined Eesti Ekspress and two of his journalists for publishing information about the case during the preliminary investigation phase which led to a public debate on media freedom. fines were later canceled – ed.)

Do you see any danger to journalistic freedom?

I see no danger. Things are going well in terms of press freedom in Estonia. Journalists are free to cover all sorts of subjects. And even if such conflicts arise, I think journalists will not be intimidated. It’s all been pretty quiet in the grand scheme of things.

Your fellow member of Isamaa, former Minister of Justice, Minister of Foreign Affairs, Urmas Reinsalu, said that once the press feels that their freedoms have been curtailed, the problem is already created.

It is important to cover all subjects in the media, including freedom of the press of course, while respecting the judgments of the courts. And if it seems like the law needs to be changed when court decisions seem unfair, that too needs to be discussed. And it can also be discussed in the media to finally arrive at a different regulation.

But just as the freedom of the press must be protected, so must our legal order, so that those who have committed crimes do not go unpunished because information was revealed at the wrong time or because of false information. . It is also crucial. Our security is important.

One of the goals mentioned in the coalition agreement is to keep society as open as possible and the services available under the conditions of the coronavirus. In truth, no one knows what’s to come this fall. It is clear that there will be a new wave, while no one knows how serious it will be. What legislative changes should be introduced regarding restrictions in such an uncertain situation?

Prime Minister Kaja Kallas (Reform) has also hinted that she believes society will no longer tolerate such severe restrictions. Therefore, it seems to me that no government partner wants to order far-reaching limitations. I can’t say if legislative changes are needed, it may require further analysis and debate. I think it will depend on the situation because we don’t know what will be in the fall.

But based on the current situation and attitudes of the parties in government, the will to order restrictions could be more decisive than what we have at the level of legislation. The latter can be adjusted if necessary, but it requires additional analysis.

The issue of reinstating special judges’ pensions arose under the previous government. Do you agree with your predecessor Maris Lauri on the fact that special pensions should not be restored?

Opinions differ. We did not discuss it in the ministry or in the party. I won’t give you a definitive answer at this time, but it will come back, and I can comment then.

IGWC-EU meets with graduates task force, calls for union recognition to be put on the agenda – The Bloomingtonian