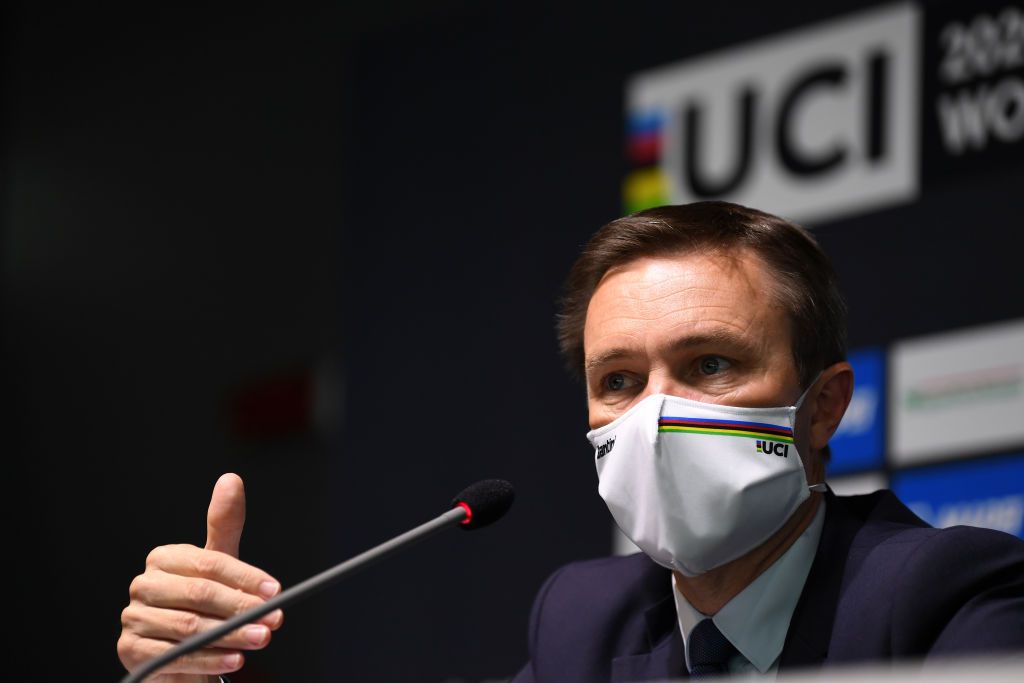 UCI President David Lappartient was at the World Gravel Championships in northern Italy on Sunday, spearheading the federation’s embrace of the ‘spirit of the gravel’ and seeing Gianni Vermeersch don the first arc jersey -men’s elite rainbow of the specialty.

However, Lappartient has also faced further questions regarding his recent comments on freedom of the press and the continued presence of oligarch Igor Makarov on the UCI’s steering committee.

During the UCI Road World Championships in Australia, the UCI refused to accredit Cycling tips journalist Ian Treloar, then comments emerged from an interview with Velonews where Lappartient said: “There are always great stories about Cycling tips but never in favor of the UCI.”

“This guy is sitting in Australia sipping a beer. What did they do about it? he said of a Treloar investigation into the evacuation of Afghan runners and people linked to the Afghan Cycling Federation.

“I’m proud of what I’ve done and I have nothing to say to him. He can continue to write bad things about the UCI. To be honest, I don’t care, but if there is something, I won’t overlook it.

The UCI argued that Treloar had not received accreditation for Wollongong as no media were allowed more than three media representatives at the championships. However, other media often receive more than this number of accreditations.

A member of the International Association of Cycling Journalists (AIJC), Treloar has written and researched extensively on the UCI’s role in the evacuation of Afghan athletes and Makarov’s membership in the board of directors. UCI. He also investigated the bizarre relationship between the UCI and former president and autocrat of Turkmenistan Gurbanguly Berdymukhamedov. Turkmenistan has been called one of the most repressive states in the world.

Lappartient avoided the three media accreditation rule when interviewed at the World Gravel Championships, but continued to bristle at what he saw as biased media scrutiny.

Lappartient again specifically criticized news reports about his involvement in the evacuation of riders and personnel from Afghanistan.

“I can tell you that I spend so much time, night and day, helping the Afghan horsemen, and therefore, getting shot. [by Cyclingtips]I thought it wasn’t balanced.”

In April, Makarov was named to a list of individuals sanctioned by the Australian and Canadian governments following the Russian invasion of Ukraine.

The individuals were considered by the Canadian government to be “close associates of the Russian regime, including Russian oligarchs and their family members, who have been sanctioned for their complicity in Russia’s unjustifiable invasion of Ukraine.” .

Makarov did not attend the UCI Management Committee meeting during the Road World Championships in Australia. But Lappartient again defended his position on cycling’s most important governance committee, citing International Olympic Committee rules.

“He wasn’t in Australia. It was just a face-to-face meeting, we didn’t have a video link. But he is still a member of the UCI management committee,” Lappartient said.

“We are aligned with the position of the IOC, which is that Russian teams and riders should not participate in any competition. However, the Russian or Belarusian Olympic committees are not suspended, neither their national federations nor their officials.

“They can’t travel to certain countries and that’s a challenge for all of us. We have ongoing discussions in the Olympic movement to see our position for the Paris 2024 Olympic Games. It’s difficult with what happened in Ukraine.

Embrace the spirit of gravel

Lappartient was happiest talking about the first gravel world championships in Veneto, which he attended in person.

“I think it was important to be here. You can feel the spirit or the atmosphere is different,” he said.

“Gravel has a bright future. At the UCI, we were able to name the hosts for the Gravel World Championships until 2027. There is a lot of interest from different continents.

“We can feel it’s something really different and even the best drivers want to be here. Gravel is booming and essential for the bike industry and for the UCI. As an international federation, we must be connected to the reality of our sport. Sometimes big federations are like ships and hard to turn.”

Lappartient insisted he had no intention of trying to regulate large gravel events in the United States, but believes an official UCI World Championship can help the whole specialty.

“We know there are a lot of gravel events outside of the Federation because it’s kind of a ‘free’ discipline. We don’t want to lose that spirit, but we can deliver a world championship title,” he said.

“The rainbow jersey is an icon for all riders and winning the jersey is recognition for the gravel as well.

“We don’t want to be strict, which is why we mix amateur and pro riders in the same event. It’s the same as in the Gran Fondo series and in the MTB Marathon, where you can have the best riders in the world but also you and me.