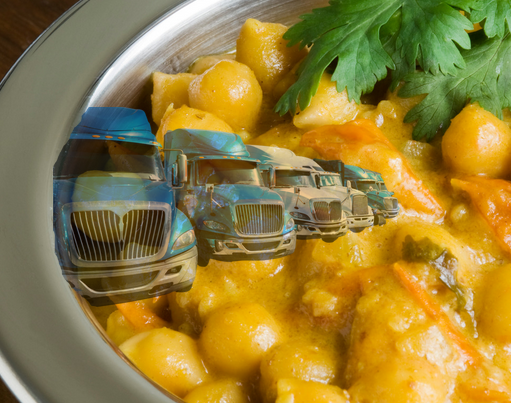 When The Seeker sent me the latest “Organization” Freedom Convoy 2022 “press release” (give me a break) and asked if I would be interested in writing a comment about it, I been overwhelmed by the desire to sleep.

Nevertheless, I dutifully read the thing and spent a few hours trying to write observations with deep insights or at the very least, a new perspective. I gave up and went to cook supper.

While peeling onions and crying into my curry, I realized that my inability to come up with anything new and interesting was due to the Freedom Convoy itself having nothing new to say and in fact had never done so.

The press release contains 1,245 words of praise, condemnation of government tyranny and police brutality, and “if you build it, they will come” hopes and dreams for the future. It is believed to be endorsed by world leaders who have denounced Trudeau’s “tyrannical and unjustifiable attack on the rights of Canadians.” A quick Google search for these condemnatory world leaders led to Trump Jr and an MP in Romania. Mind you, I guess it depends on how and who you define as “leader”. That undoubtedly includes a royal nod from self-elected “Queen of Canada” Romana Didulo? Link https://vancouversun.com/news/daphne-bramham-the-absurd-and-disturbing-tragedy-of-romana-didulo

One of my issues with this group is their reluctance to abide by the linguistic definitions that we all understand. In perfect Propaganda 101 style, they endlessly repeat words like “peaceful,” “legal,” and “protest” when the visible reality is anything but. What is a demonstration against an occupation? What is peaceful versus violent and from whose perspective is peaceful action? I know that residents of Ottawa did not consider the occupation “peaceful”. What is legal or illegal and who can define it? I’m not a lawyer, but it seems to me that occupying any nation’s capital for three weeks and attempting to cripple a democratically elected government would not be considered legal in any country. I could go on, but you win the point. Imperfect as it may be, we adhere to an agreed set of definitions and laws that allow us to function as a society.

The Freedom Convoy came about after God apparently communicated his wishes to Canadian Unit Leader Jame Bauder (@2:50 mins in this Fifth Estate report) Link…https://www.youtube.com/watch?v=y2OlAXDW7W0&t=2s and from the beginning this “movement” lacked reasonable and well-defined goals that could be measured and achieved by us mere mortals.

“Every day, more and more Canadians and people around the world are joining us to voice their concerns in Ottawa, across our country and around the world. This important statement makes no sense. For better or worse, the phased repeal of health care mandates has been in the works for several months and owes little or nothing to their extravagant efforts. Loud as they were, they naively equated making noise with making a statement. And that has sad repercussions.

If you take away the extremists, the right-wing religious, the haters and separatists, the political hopefuls (not a chance in my book) and the empty hangers, you end up with people who probably have legitimate concerns that should be heard. By jumping on the “freedom” bandwagon, they muzzled themselves by joining a coalition of fools who are universally decried as ignorant and entitled. Worse still, they ensured that their concerns were conveniently ignored by politicians and the public who might otherwise have listened to them.

Most of this press release is an exaggerated opinion lacking identifiable facts to back up the statements made. Ultimately, these are the gasping last gasps of a band that has achieved nothing but is trying to keep the message alive. If only he had something to say.

Media under attack, journalists must stand up to protect press freedom : Justice Lokur : The Tribune India