CCTV: It is reported that on June 17, the British Home Secretary approved the extradition of Julian Assange, the founder of Wikileaks, to the United States. Wikileaks said in a statement that Assange is a “journalist and editor” who “is being punished for doing his job.” Do you have a comment on this?

Wang Wenbin: We took note of the reports. Wikileaks, founded by Julian Assange, has published a large number of documents on the wars launched by the United States in Afghanistan and Iraq and has leaked facts about CIA hacking operations. Over the past decade, the US government has responded by laying charges against Assange, including sexual assault, espionage, and computer misuse, and cracking down on him with covert surveillance, global hunting, clandestine deals, and more. . for the sole purpose of putting him behind bars.

The UK spared no effort to help the US arrest and extradite Assange and handled the case at full speed. This fully highlights the UK’s allegiance to its special relationship with the US and highlights the fact that the US and the UK have worked hand in hand to impose transnational repression against particular individuals. .

All eyes are on Assange’s human rights conditions and what he might become. Hope and believe that in the end fairness and justice will prevail. Hegemony and abuse of power will certainly not last forever.

We have noted that the United Nations Refugee Agency recently highlighted in its annual report that the number of refugees, asylum seekers and internally displaced persons forced to flee conflict and persecution has passed the 100 million mark. for the first time. The United Nations Children’s Fund (UNICEF) also made the latest estimate that conflict, violence and other crises left a record 36.5 million children displaced from their homes at the end of of 2021, the highest number recorded since World War II.

These heartbreaking figures highlight the consequences of arbitrary aggression and interference by a few countries in the internal affairs of other countries. According to statistics, between 49 and 60 million people became refugees due to wars led by the United States after 9/11, including 11 million in Afghanistan alone. The United States has launched wars ostensibly for democracy and human rights, and has come away leaving a mess behind. But it is the populations of the countries of the region who face displacement, poverty and backwardness and a future full of uncertainty. What the United States has done is the main factor fueling the refugee problem in the world and constituting serious human rights violations.

Recently, Filippo Grandi, UN High Commissioner for Refugees, wrote that some countries are trying to outsource the responsibility for protecting refugees by “warehousing” them elsewhere. He also noted that the wealthiest states, with the greatest resources, “respond by building walls, closing borders and pushing back people traveling by sea.” It is a trampling and a “contempt for the ideal of protection”, he added.

World Refugee Day only lasts one day, but refugees face their plight every day. Some Western countries led by the United States have long exported war and unrest, interfered in other countries’ internal affairs, and created humanitarian disasters. They are the ones who created the refugee problem in the first place. We urge these countries to think seriously about the serious consequences of their behavior, to eliminate the root cause of the refugee problem and to assume their responsibilities. China stands ready to work with the international community, firmly uphold multilateralism, and play a constructive role in improving the global refugee protection system and working to resolve the refugee problem. 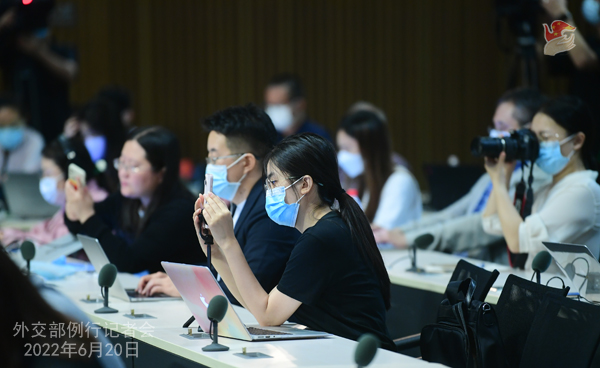 Beijing Daily: We saw from a report released at the opening ceremony of the Third Qingdao Multinational Summit yesterday that China remains an important investment destination for multinational companies around the world. Do you have a comment on this?

Wang Wenbin: I noticed that according to the report “Multinationals in China: Choices in Rebuilding Global Supply Chains” released at the Third Qingdao Multinationals Summit, China remains an important destination for global investment by multinationals. China has seen a steady growth in investment from multinationals. Both the structure and the performance of these investments have steadily improved. The number of new foreign investment contract projects and projects with additional foreign investment worth more than $100 million increased from 834 in 2019 to 1,177 in 2021, double-digit growth for three consecutive years . China attracted $33.73 billion in investment in its manufacturing industry in 2021, registering an 8.8 percent year-on-year increase, and more than a third of FDI went into high-tech manufacturing.

As a host of policies aimed at effectively coordinating pandemic response and socio-economic development continue to take effect, major indices improved margins in May and the Chinese economy showed recovery momentum. According to statistics from the General Administration of Customs of China, China’s merchandise exports rose 15.3 percent in May year-on-year. A report released the other day by the Shanghai Shipping Exchange shows that China’s container shipping market has remained generally stable. At the Port of Shanghai, ships bound for all major routes, including European service, US West Coast service and US East Coast service, are almost fully loaded on average. During the shopping festival on June 18, e-commerce platforms in China recorded a record sales volume. Busy delivery people are the epitome of China’s robust consumer image.

China’s steady economic performance has further boosted the international community’s confidence in China’s economic prospects. The American Chamber of Commerce in China said in its latest white paper that most member companies said they believe it is vital to remain competitive in the Chinese market in order to win globally, and that they remained attached to the Chinese market. In the first five months of this year, inward FDI increased by 17.3% compared to the same period last year, or 22.6% in US dollars.

Going forward, we will further facilitate market access, promote fair competition, and improve trade and investment liberalization and facilitation to create a market-oriented business environment based on the rule of law. and conforms to international standards. As State Councilor Wang Yong pointed out in his remarks at the opening ceremony of the Qingdao Summit, China’s door will open wider, providing a better business environment and more development opportunities. in the world. We welcome foreign enterprises to invest and operate in China, explore the Chinese market, engage in fair competition and share development dividends.

Bloomberg: We have reported that Biden administration officials are increasingly concerned that China’s vague new assertion over the Taiwan Strait could lead to more frequent sea challenges for Taiwan. So, does the Ministry of Foreign Affairs have a comment on this?

Wang Wenbin: We have already made it clear that China has sovereignty, sovereign rights and jurisdiction in the Taiwan Strait. China has always respected the navigation rights that countries are entitled to under international law. However, we firmly reject any country’s provocation and threat to China’s sovereignty and security in the name of freedom of navigation.

China Review News: We have learned that World Cup host Qatar has changed “Taiwan” to “Chinese Taipei” in its application system. What’s your comment ?

AFP: Could you confirm that the second part of the UN Biodiversity Summit COP 15 has been moved out of Kunming, China, and will now be held outside of China, although China is still chairing the summit?

Wang Wenbin: The first part of the fifteenth meeting of the Conference of the Parties to the Convention on Biological Diversity (COP 15) was successfully held last October, which renewed the political will to advance the global governance of the biodiversity. Due to the impact of COVID-19 around the world, the second part of COP 15 must be postponed. At present, China is consulting with the CBD Secretariat and the Presidium for the scheduling of the second part of the meeting. China will continue to serve as chair and hold discussions with all parties to determine the timing and venue for the second part of the meeting. China will also make active preparations in light of the COVID situation to ensure a safe and successful second part and take global biodiversity governance to a new level. 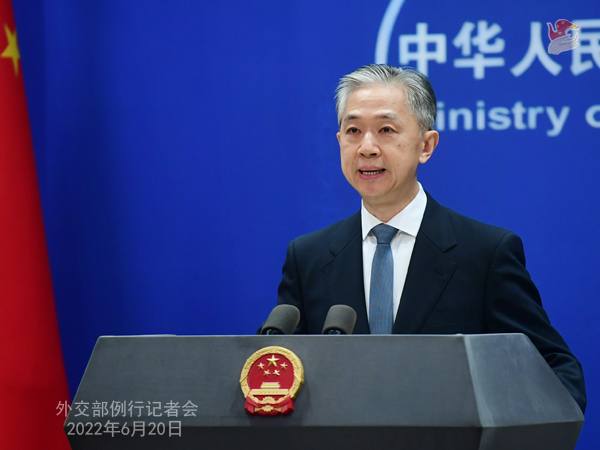