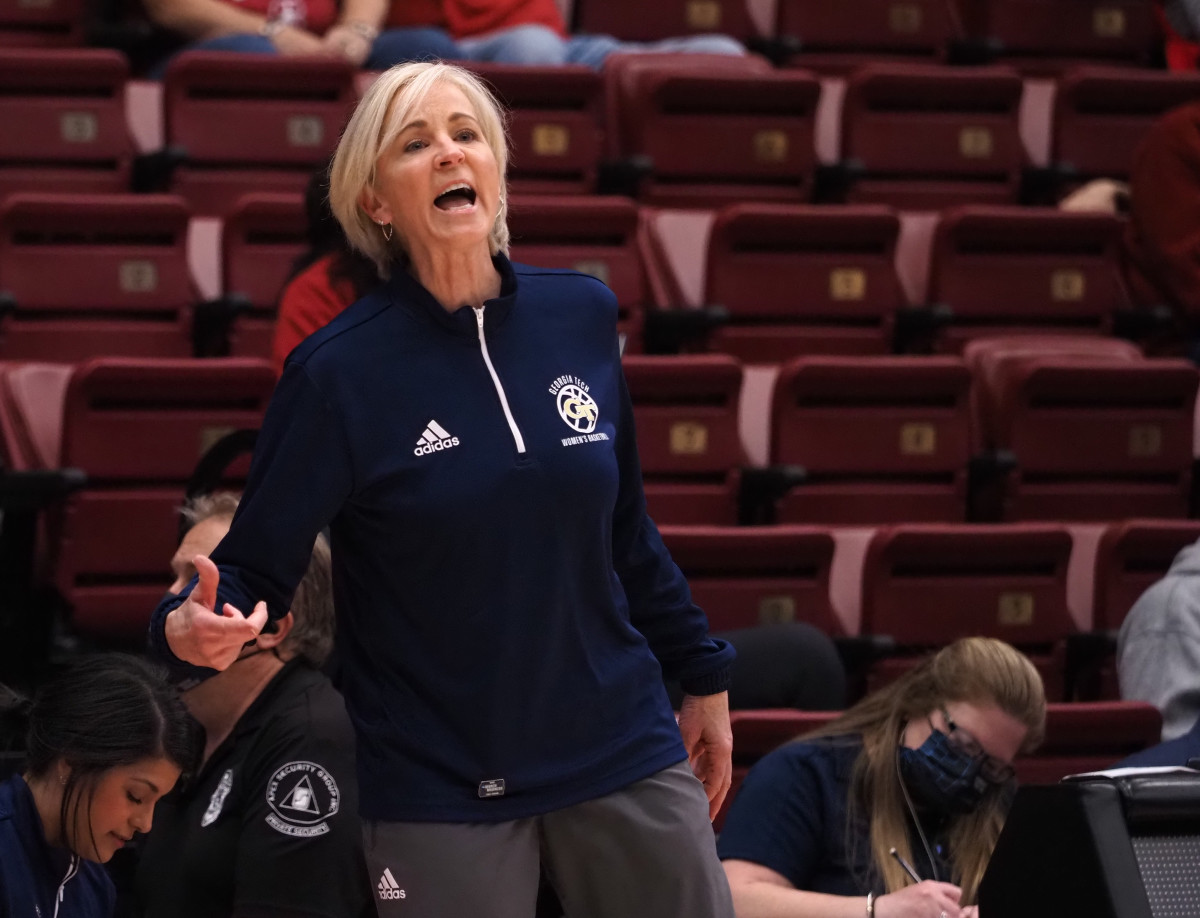 As football season draws to a close, college basketball season is right around the corner and it’s sure to be an exciting one for Georgia Tech and women’s basketball head coach Nell Fortner. Fortner has done a terrific job with the Yellow Jackets program and is looking to bring Georgia Tech to its third straight NCAA Tournament appearance.

Fortner spoke to the media on Tuesday ahead of the season and here’s everything she had to say:

“Thanks for being here, good to see everyone. It’s hard to believe we’re almost there, getting started, but I guess the biggest thing people are going to notice is that we’re different this year, we’ve lost players that we’ve coached over the last three years that have really…really done a good job, allowed us to have a sixteen, the NCAA tournament twice and really brave players. Now we have 13 players in the squad, seven are new, six are returning, so we’re trying to… it’s a new look and it’s a new day.”

“We are coming off a team that has just three years of being one of the best defensive teams in the country. Not just in the ACC, but in the country. We have a lot of ground to make up for. Losing Lorela Cubaj are de Big shoes to fill. Two-time ACC Defensive Player of the Year, so those are really big shoes to fill, but we have some really good players coming in who are pretty talented that we’re going to rely on and who are going to have to help us. Tonie Morgan, Kara Dunn, we have transfers to Bianca Jackson and Cameron Swartz, Bianca from Florida State, Cameron Swartz from Boston College.

“It’s really changed the style of play for us, which we’ve been doing for the last three years. We’re more mobile, we’re a bit bigger on the perimeter… well I don’t know, I’m thinking ( Digna ) Strautmane played a lot last year and she was quite tall but we are mobile and can put a good size on the floor Nerea Hermosa is back a four year old player for us and we are looking for her to have a great senior year I think the most important thing is we’re going to be different and it’s going to take us a while to find ourselves and who we are on the pitch but they’ve been a fun coach and I can’t wait to play start.”

1. On whether she will have to rely on transfers (Jackson and Swartz) to score…

“That’s an interesting question. We really want them to score because they definitely have a lot of experience in this league, but freshmen coming in can score, it’s not like waiting for your turn. to score we want to score faster and have more possessions we score faster so it’s a bit of an equal opportunity offense it’s not like ‘I’m not shooting because Bianca (Jackson) hasn’t shot yet”, it’s a bit more open type of offense and we’re looking for the first good shot and no one has dibs on that shot.”

2. If Bianca is used to advancing the attack quickly…

“You know…she can freestyle, and I don’t know if that’s the best way to put it, she’s good with the ball in her hand, she’s good at playing with the rebound, so she has a bit of freedom in that attack to be able to take advantage of it. So really do them all. We’re trying to play a style that gives them a bit of that so they can take advantage of their skill. So hopefully that is a fun style to watch and we’re not throwing the ball all over the gym, you know that’s the thing we might see early on, but hopefully not.”

3. On the local schools game…

“I don’t know if I want to see it like this, but any time we can create a rivalry in this area, well, good for both teams, it attracts people to come and see you play. I have a lot of respect for Kennesaw State and what (Octavia) Blue has done, and a lot of respect for Georgia State and what Gene (Hill) has there. It’s just respect for the programs and I think just that it gives all of us an opportunity to play here in front of our people, these three teams, and then throw Clayton State in there, which we play on Thursday, but it’s more of a respect for their programs, bringing people into the stands to come and watch both teams play”

4. Who they will rely on when Nerea Hermosa is on the bench…

“Kayla (Blackshear) is a really capable and versatile player, with Eylia Love they are versatile and can play both inside and outside, but we lost a lot of size with Cubaj, a lot of size with her. But hopefully with Aixa Wone Aranaz she is 6’3 so we have a good combination of post players who can get in there and help Nerea when she needs a rest but Nerea…we are looking for her to do great things for us, to be able to bring the ball back to him a bit more this year, we’ll see if it works. But I like the size, I like the versatility that we have with this team, we have players who can play on the perimeter, off the rebound, or they can go inside and post you, so that gives us a lot of good options.”

5. If she prefers the new style of play in recent years and what kind of adjustments she made…

“Our goal always when we took the job here as coaches was always to play faster and be able to pick up the tempo and we’re going to be able to do that more this year with Tonie Morgan, Bianca Jackson, Cameron Swartz, Kara Dunn , they can run, Eylia Love, they can go out and run so we want to enjoy it so it’s going to take us a while for it to come and we’re going to have to be extremely comfortable with it and not be afraid of it and run all the time, hit or miss, we’re off. So it’s gonna be interesting to see how that unfolds because we’re not there yet to be really honest with you, to play the competition and have a idea of ​​how you want to push that ball like that maybe we’ll see we’ll see what it looks like maybe we throw the ball all over the floor or throw it over the backboard I I don’t don’t know, but maybe it will be a sty fun to watch and play.”

6. If things are where she wants to be in terms of building the program…

“I think that put us a little behind (COVID). COVID took you off the road to recruit for about two years, so that put us a little behind, but this first class year is a great core group that we’ve had to build and fall behind and add so we’re excited about that so hopefully we can speed up the process hopefully maybe maybe you know , but I like the class that we are about to sign in November to add to that freshman class to go with that core of older players that we have to see what we can do.”

7. Why she wants to play faster…

“Well, it’s appealing, for sure. It’s appealing to rookies and they want to hear that we play fast, so that’s one thing, but as coaches it’s more fun to play. let’s go out and run, use our athleticism, speed and quickness and make people keep us. You know, one of the hardest things to keep in basketball is rebounding, being able to keep somebody ‘one that goes to the strong basket, that’s very hard to keep. Hopefully we can take advantage of that and see what opens up for us, we might not always get the hang of this nobody, but we could give someone else a good look on the pitch. So yeah, we want to play fast.

“She’s playing between threes and fours, so she’s not as much of a ball handler for us this year. We have Swartz, Morgan, Jackson, Ines Noguero, a freshman from Spain, who is playing a point backup since us and she’s a really good ball handler so we have a lot more ball handlers to create things for our finishers It’s definitely a different style to what you’re used to seeing us play .Hopefully it’s a different style and we don’t need to go back.”

9. If she knows who will start…

“I have an idea, but we’ll just wait for game time.”

“I don’t think it’s something unfair. When you lose Lorela Cubaj and Lotta-Maj Lahtinen, it’s unfair, that’s what happens. Now we have to get the players to step in and fill those shoes and go beyond that, but that’s okay. It creates a huge challenge for us and it creates a ‘we’ll make sure they know who we are’ and they have to fight for something. I don’t think that’s necessarily a bad thing, we have some catching up to do, and hopefully we can get there.”

11. If Tonie Morgan is ready to play a lot of minutes in first year…

“Yeah, she’s a phenomenal athlete, a very good track athlete, so she missed some time at first, but it only affected her fitness for two days, and then she got back to work. She is extremely fast and she could probably play it all all day.”

Follow us on social media for the latest news with Georgia Tech Athletics!

See all the latest Georgia Tech news at AllYellowJackets.com

Check out the Georgia Tech homepage

Listen to the Goal Line Stand podcast for the best coverage of Georgia Tech and national college football!

How to Watch, Listen and Stream Georgia Tech vs Virginia Tech Live

Georgia Tech in the NFL: How did the former Yellow Jackets fare in Week 8?