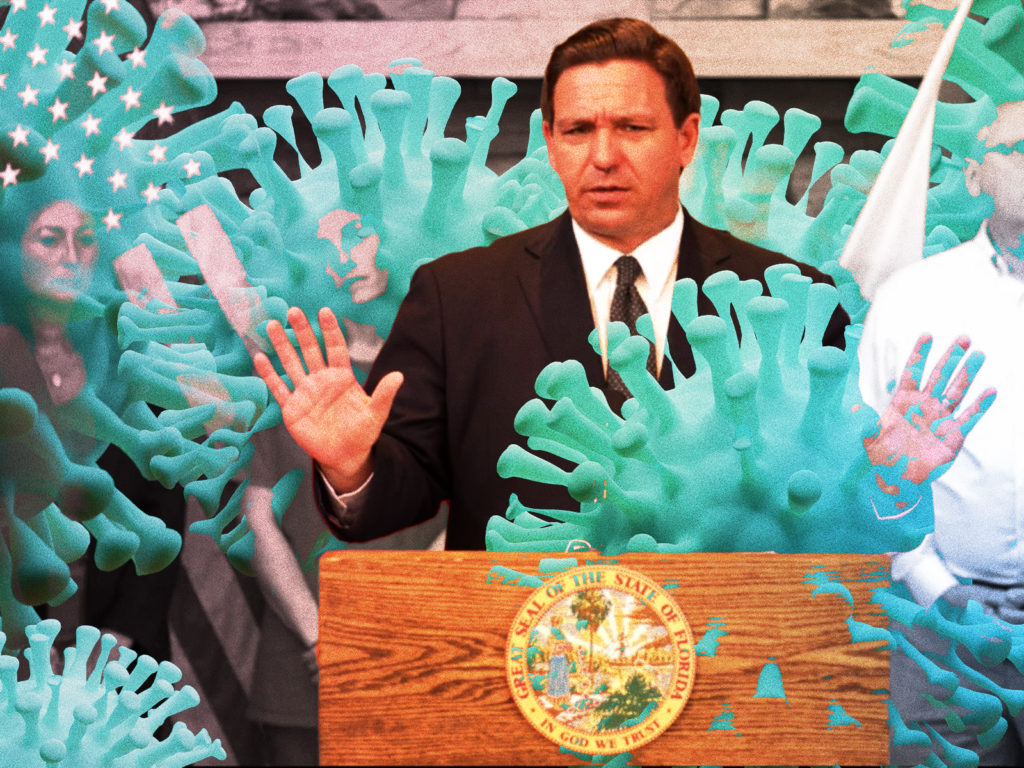 At a press conference Monday that aimed to promote “the protection of Florida freedoms,” Gov. Ron DeSantis called on anti-vaccine residents to stand behind the state seal and explain their opposition vaccine in front of the gathered media. One of DeSantis’ featured speakers falsely stated that “the vaccine changes your RNA” – the sort of claim frequently made by anti-vax conspiracy theorists.

Without correcting the record, Governor DeSantis then took the microphone and invited another woman who said she would not get the vaccine because it is “my body, my choice.”

It doesn’t seem like the type of press conference you would host if you encouraged people in your state to get hold of a life-saving vaccine that could have averted thousands of deaths in the state’s latest wave.

The remark regarding vaccines and RNA came from Darris Friend, an employee of an electric utility in Gainesville, Florida who is join a trial to reverse local requirements that he be vaccinated. Introducing Friend and the other speakers, DeSantis said he will “protect their jobs” and that people with such views should not be “treated like chopped liver”. Here is a transcript of the relevant part of the discussion:

RON DESANTIS: So we have Darris Friend here, he’s eligible to retire in a year and a half. Now that he’s threatened with dismissal, he could lose his pension, but he thinks it’s a matter of principle, so he’s ready to stand up. So here is Darris.

FRIEND DARRIS: Okay thank you so i have no speech and forgive me for sweating i was on the road trying to get you all to come here to see the governor so thanks for coming today hui.

So like the governor said, I’ve been in town since 1999. I’m about a year and a half from retirement, and for me it’s not about the vaccine. This is compulsory vaccination. No one should tell you what to put in your body. I choose what goes on in my body, of course I eat burgers and fries but it’s my choice what I put in it. So there are people who choose to eat non-GMO foods, or they are vegetarians, or they are, they don’t want to eat foods that have been grown with pesticides and herbicides. No one should force these people to eat meat or vegetables grown with pesticides or herbicides.

The vaccine changes your RNA. So for me that’s a problem.

So thank you for coming today, and thank you, Governor.

Here is the clip:

During Ron DeSantis’ press conference today, a guest claimed that COVID vaccines alter your RNA, which is absolutely false.

I’m putting this longer clip here so you can see that DeSantis hasn’t done anything to correct this misinformation, which is prevalent in the anti-vaxx movement. pic.twitter.com/Sqq7RbaHF2

DeSantis, after giving the mike to this non-scientist to express his point of view on science, did not correct the remark about vaccines.

IIn another press conference earlier Monday, DeSantis doubled down on its long-standing opposition to vaccination warrants. This week Florida will start paying a fine counties and cities that require vaccines for government employees or businesses that require vaccines for customers. The fines will be $ 5,000 by incident– which, DeSantis said, could result in â€œmillions and millions of dollars in potential finesâ€ for any given entity.

His plan to fine counties and cities for protecting their workforce is also doomed to end up in court.

It is true that, unlike some of his Republican counterparts, Governor DeSantis promoted the vaccine when it was released, long before it was approved by the FDA. But its promotion was quite limited in nature and scope, and it did not last long. DeSantis could and should have spent more time promoting the widely available and largely free vaccine in a state where 35 percent of adults (and 45% of the total population) are still unvaccinated, contributing to an ugly fifth wave of COVID:

DeSantis has been criticized for choosing to promote Regeneron therapy for COVID, which benefited one of his political financiers. (He called for foul play from the press for reporting it.)

The line about DeSantis in the conservative media is that he’s “Trump without the cringe.” Like other 2024 hopefuls, this is going to require creative positioning – they can’t stray too far from Trump but don’t want to get too close to him either. In the case of DeSantis, its political positioning could cost lives.