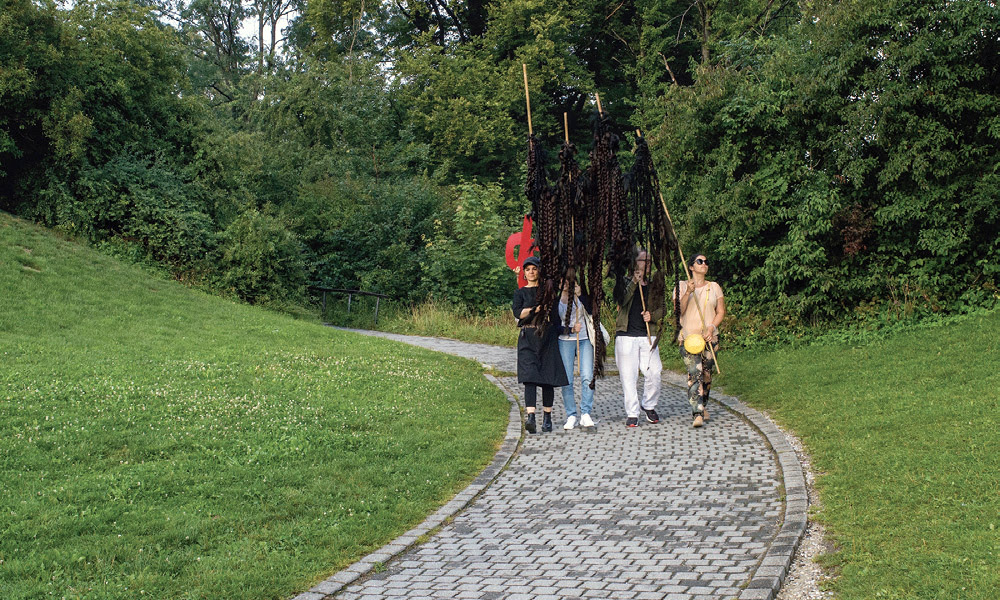 Crossing borders, imagining Heimat: on art and the home

An excerpt from Peter Chametzky’s book “Turks, Jews and Other Germans in Contemporary Art”, the first volume to examine multicultural visual culture in Germany.

Parastou Forouhar was born in Tehran in 1962. She arrived in Germany in 1991 to study at the Academy of Fine Arts in Offenbach, near Frankfurt, where she now lives and works. His work consists of drawings, books and installations, many of which incorporate black Persian calligraphy. She commented that her writing is research for her Heimathis homeland.

Heimat is a key German term, suggesting rootedness in a particular place and its traditions and customs, one’s place of comfort and belonging to the world. The glossary of the essential anthology of writings on German diversity, “Germany in Transit: Nation and Migration, 1955-2005”, defines the typical understanding of Heimat and its iconographic and gender associations: “Native land, fatherland or home. This untranslatable German word connotes the romantic longing for a sense of place and evokes pastoral landscapes and regionalism, as in Heimatfilm.” As historian Alon Confino asserts, “Germans like to think that the idea of ​​Heimat is unfathomable, mysterious and, above all, peculiarly German”. Indeed, as he showed, Heimat is yet another “made-up tradition,” to use political scientist Benedict Anderson’s famous phrase and concept.

Throughout Germany after 1880, similar iconography and tropes – woods, fields, mountains – became associated with various localities which were each designated as a single place. Heimat, this irreplaceable place of origin and desired return. The “Heimat idea” therefore stemmed less from each of these specific individual places with very specific characteristics than from the general German desire to create a national identity that could be invoked throughout the new and fractured nation.

People who would not fit in well and who, at best, would complicate such Heimat the imagery—historically, the Jews in Germany; today, people “with an immigrant background” often refer to several homelands. The acerbic German-Jewish writer Henryk Broder wrote: “The big problem with Heimat, it seems to me, is that a person is supposed to choose one. It would be better not to have any at all. Or better yet: have a lot. Burcu Dogramaci comes to a similar conclusion in the last line of his book studying the term and the concept of Heimat in contemporary art: “The question posed by the writer Max Frisch, with which this book began, ‘How much Heimat do you need?’ can by this logic have only one answer: Many HeimatsMore than I can count.

For Parastou Forouhar, the use of Persian (or Farsi) calligraphic script, covering the walls and floors, and written on table tennis balls spread throughout the installations, creates his only imaginary and imagined home. Her parents, Parveneh and Dariush Forouhar, were prominent secular dissidents in Iran and were murdered in their home in 1998. If she were to return to Iran, she would face imprisonment. Can’t go back Heimat, she imagines and creates houses in language. In his statement for the 2000 exhibition catalog Heimat Kunstshe thought about the concept of Heimat and his use of Persian in relation to this:

I am a Persian woman. I can tell wonderful stories about my homeland (Heimat), this may not be true. I have wonderful memories of my country, and I don’t know if I manipulated them. At some point, and I don’t know exactly when, I started building an imaginary castle from the term “Heimat”. And since then, my Heimat has grown invisibly and beautifully in my thoughts. I look for it in the writing of my mother tongue, which spreads smoothly, rhythmically and invitingly with the openness and indifference of the beautiful Persian forms left by the old masters of centuries past.

Like the work of historians such as Confino and Celia Applegate, Forouhar’s work challenges both the idea of Heimat as specifically German and of its existence outside systems of representation, of which language is a prime example.

Farkhondeh Shahroudi is another Iranian-born but long-time German artist, based in Berlin and working in Farsi and German – and, unusually, not English. Born in Tehran in 1962, Shahroudi arrived in Germany in 1990 and was granted political asylum. Her website states, in English: “After studying painting at Al-Zahra University in Tehran, then art and design at the University of Dortmund, she directed her research towards research where the use of textile materials and sewing have become predominant, in constant dialogue with her poetic writing, which she has always practiced and considers to be the primary source of her artistic expression.

She writes her stream of consciousness poems in German and Farsi and incorporates them into performances, many of which are collective, involving participants in the spirit of Allan Kaprow’s happenings. When she writes in German, however, she writes with her left hand, which makes her more aware of her body’s investment in translating the linguistic impulses emanating from her mind.

In 2017, Shahroudi was a member of the famed Florentine Villa Romano, founded as a German cultural institution by artist Max Klinger in 1905. While there, Shahroudi, who claims all of her work stems from her unconscious, engaged in a dialogue with the ghost of a former comrade, Max Beckmann, who painted his self-confident “Self-Portrait in Florence” there in 1907. The rosy-cheeked young man in a black suit gazes confidently at the viewer, holding his white cigarette tilted downward in his right hand, as if it were the brush with which he applied the loose dabs of paint that form the background of his more firmly articulated form.

Back in his studio in Berlin-Wedding, Shahroudi launched a series of poem-drawings on paper and on the studio wall declaring “max beckmann war nicht hier” (max beckmann was not there), establishing his own hegemony in this space, linguistically exorcising itself from the ghost of Beckmann, and perhaps alluding to its own exile in Germany through Beckmann from Nazi Germany. In a left-handed drawing, however, she references Beckmann’s 1907 self-portrait, inserting her own vertically oriented hand next to his horizontal, while his horizontal cigarette reaches toward his vertical. The text states that she “likes to smoke with Max Beckmann”. The elements of the drawing are placed under erasing, forming floating signifiers floating on the surface of the drawing.

Back in Iran, she ordered a banner with traditional Persian embroidery defining the corners and her liberating phrase, “max beckmann was not there”, emblazoned with bright red German lettering. Hanging on the exterior wall below the windows of his studio, it recalls the signage of buildings occupied by squatters, while declaring that his studio was never occupied by Beckmann. The pleasingly colored and decorated banner seems more appropriate for a celebration than a protest march or occupation: perhaps with such a festive performance Shahroudi’s spectral Beckmann will finally go up in smoke.

On July 14, 2018, Shahroudi staged the participatory performance “Wave Anti-Flag Demo” in the English Garden in Munich as part of the first outside performance festival organized by curator Emily Barsi. The group created “flags” from braided hair and carried them through the park. Such flags connect directly with the material of humanity, unmediated by state affiliations. Shahroudi also read a stack of his poems. These had been written with his left hand; she handed them out to attendees to read her wonky script. She held up signs with words that cross borders, which, by their sound (onomatopoeia), have meaning in a variety of languages, such as “Oh”, “Ah” and “Wow”.

Here too his work seeks to transcend boundaries, including those imposed by language, as did the Zurich Dadaists, such as Tristan Tzara in his 1917 poem “Karawane”. Responding to the carnage of the nationalist and imperialist World War I, the poetic outpourings of the Zurich Dadaists attempted to replace the mind-numbing national languages ​​with avant-garde Esperanto. According to Barsi, Shahroudi’s poems “all have to do with war, the sounds of war and her condition as an emigrant who escaped war and repression, now living in a foreign land”.

By writing and reciting poems in several languages ​​and, in particular, by using sounds understood across borders, Shahroudi emphasizes the universal acoustic dimension of language – like the wind through the trees of the park which can speak to anyone, regardless of nationality or language background, or the cymbals she was ringing, the image of which recalls a famous photograph by Joseph Beuys in his May 1969 performance, “Iphigenie/Titus Andronicus “. Beuys’ performance is inspired by two violent and bloody plays rooted in antiquity: Goethe’s “Iphigenia as a Bull” and Shakespeare’s “Titus Andronicus”. Beuys, a World War II veteran, transformed these tales of revenge and murder into materials, sounds and actions meant to suggest resurrection and redemption. Like Shahroudi, Beuys sought to transcend national boundaries and speak across languages, and even species, as when explaining images to a hare. Shahroudi’s performance in the “English Garden” extended that legacy into the present, performing not as a male war veteran, but as a war refugee, herself embodying and enacting border crossing.

Pierre Chametzky is a professor of art history at the School of Visual Art and Design at the University of South Carolina. He is the author of “Turks, Jews and other Germans in contemporary art”, from which this article is adapted.

Press freedom concerned about treatment of Filipino media in 2022 election