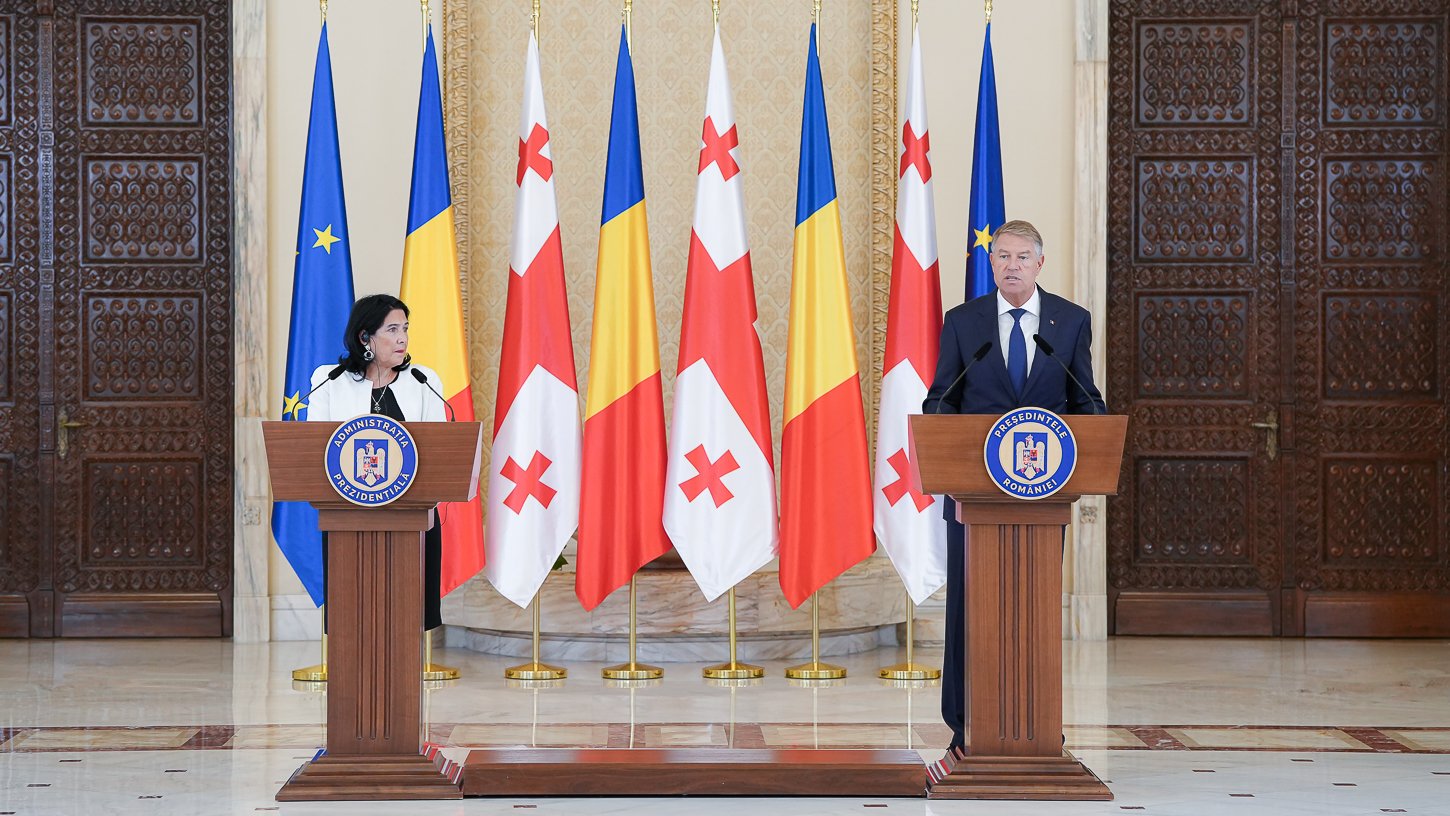 President Zurabishvili began her speech by reiterating his condemnation of the airstrikes that took place in several Ukrainian cities yesterday and continue today.

Noting that she was delivering her remarks from Romania, which shares the EU’s longest border with Ukraine, the President stressed “we fully sympathize with the Ukrainian people, [about] what is happening today in the cities of Ukraine, which is completely unacceptable to the entire civilized world.

President Zurabishvili stressed that Georgia and Romania “know a lot” about Russia’s imperial and Soviet policies, as well as “what aggression and occupation mean”. “We know what Russia can do and this is a transition to a new dimension of this aggression,” she said.

Referring to fears that President Vladimir Putin may resort to the use of nuclear weapons in Ukraine, as well as the current situation regarding mobilization in the occupied territories, President Zurabishvili said that “these are all prosecutions of ‘brutal aggressions which are unacceptable to the peaceful world’.

She also stressed that the main weapon against Russian aggression is solidarity while declaring “the full solidarity of the Georgian people towards Ukraine”.

In this context, the President commended the efforts of the EU and the United States in support of Ukraine’s struggle, which, according to her, “must undoubtedly end in victory, because it is where the fight for peace, freedom and independence for all of us, for the whole of Europe, is fought for.

During her speech, President Zurabishvili also drew attention to Georgia’s European and Euro-Atlantic aspirations while thanking Romania for supporting Georgia on this path since it recognized the country’s independence. . “Romania has been our main partner in Europe, together with Poland, and maybe even closer because of the Black Sea [connection]“, she pointed out.

The Georgian President noted the “historic step” of granting a European perspective to Georgia and underlined that “we must now take the necessary steps to work and show our European partners that we are not only ready for perspective but for membership”. “This is the true unshakeable will of the Georgian people,” she added.

Referring to the European perspective, President Zurabishvili underlined that it is the result of “Ukraine’s hard struggle” and that it might not have been achieved otherwise.

“If we spare no effort, we can achieve candidate status, that is our immediate future,” she reiterated.

Towards the end of her statement, the President also stressed the importance of the European Political Community summit held in Prague on 6 October, which brought together all countries with a European perspective, including Georgia, which she called a “great achievement for us”.

Finally, taking note of the fact that Romania played an important role both in the summit and in the partnership with Georgia in this process, President Zurabishvili drew attention to the declaration of strategic partnership that she signed today with Romanian President Klaus Iohannis. The agreement commits to bringing the two countries closer by developing existing areas of bilateral cooperation, including through infrastructure projects aimed at connecting the two countries through the Black Sea, and reiterates Romania’s support for European aspirations from Georgia.

Meanwhile, during his speech, President Iohannis underlined that President Zurabishvili’s visit takes place in a “symbolic context”, marking 30 years since the “reestablishment” of diplomatic relations between Romania and Georgia.

Like President Zurabishvili, he also referred to the joint statement the duo signed today while noting that the agreement marks a “historic moment in our bilateral relations”.

“Through this strategic partnership, our countries aim to improve their connectivity in the fields of transport, energy, but also people-to-people contacts”, explained President Iohannis and underlined that it will lead to development and deepening of bilateral cooperation on the Euro-Atlantic and European agenda, as well as within the framework of the Eastern Partnership, and the field of security.

The President declared that “Romania will remain one of the strongest supporters of Georgia’s European and Euro-Atlantic aspirations”, and congratulated Georgia on reaching a European perspective.

With regard to the reforms, the Romanian President also conveyed a “special message of appreciation for your [President Zurabishvili’s] firm position on the need to continue the reforms.

“Romania also continues to support Georgia’s Euro-Atlantic aspirations, in accordance with the decisions of the 2008 Bucharest summit,” he said. “As a concrete expression of our support, our country will assume the mandate of the NATO contact point in Tbilisi from January 1.

Regarding the Black Sea region, President Iohannis said he “agrees” with President Zurabishvili that “physical interconnections on the Black Sea are essential to strengthen the stability and prosperity of this region , anchoring it in the European area in a sustainable way”. way.”

On this note, the Romanian President indicated that Romania was already working with Georgia and other partner states on “major strategic projects”.

President Iohannis revealed that the current priority is to build an electric cable between Romania, Georgia and Azerbaijan, as part of the “green electric corridor”, connecting the Caspian Sea region with the Black Sea region and to the EU.

The President also said that Romania is partnering with Georgia to operationalize the Black Sea-Caspian Sea freight corridor, which he said is a “Romanian initiative that has started to take shape in recent years and takes on new meaning. in the current regional context.”

President Iohannis also disclosed plans for a regular ferry line between Romania and Georgia, stressing that the project would encourage trade and improve connectivity between the EU and Georgia.

Regarding the war in Ukraine, President Iohannis drew attention to the Russian airstrikes on several Ukrainian cities on October 10, which were widely condemned by the international community. “Together with our partners, Romania will continue to support Ukraine and the Ukrainian people in the fight against the aggression of the Russian Federation,” he said.

President Iohannis also noted that during his meeting with President Zurabishvili he reaffirmed a “strong message of support” for Georgia’s independence, sovereignty and territorial integrity.

He noted that Romania was the second largest contributor of experts to the European Union Civilian Observer Mission in Georgia, which played a key role in monitoring conflict-affected areas following Russian aggression. against Georgia in 2008.

Referring to the occupied Georgian regions of Abkhazia and the Tskhinvali region/South Ossetia, President Iohannis underlined that protracted conflicts “have an extremely detrimental impact on regional security and stability, limit socio-economic development and cause considerable hardship to the populations of the affected regions. Regions.”

The Romanian President concluded by stating that Romania “continues to actively support the mobilization of the attention of the European Union and the international community on these conflicts and the identification of lasting solutions to them while supporting the strengthening of Georgia’s resilience”.

Note: This article was updated on October 11 at 8:41 p.m. to reflect President Zurabishvili’s statement.