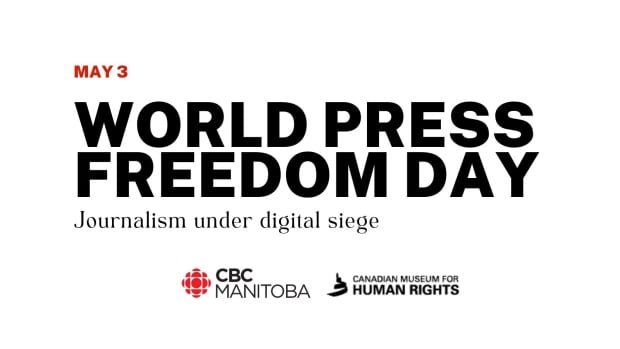 In the face of fake news, disinformation, misinformation, the relentless cycle of news and the echo chambers of social media, the importance of a healthy and free press has never been greater.

On World Press Freedom Day, when the United Nations General Assembly declared this year’s theme for press freedom to be Journalism under the siege of digital, the Canadian Museum for Human Rights and Radio-Canada Manitoba have teamed up to offer a virtual discussion on this year’s theme.

Hear from professional journalists about what they’re going through, the impact on the public, and what companies and industry can do from there. Moderated by Isha Khan, President and CEO of the Canadian Museum for Human Rights, the panelists are Andree Lau, Editor-in-Chief of CBC – Digital News, Brent Jolly, President of the Canadian Association of Journalists, and Travis Dhanraj, Senior Parliamentary Reporter for CBC News.

World Press Freedom Day is held annually to remind governments of the need to uphold press freedom commitments; for media professionals, it is a day of reflection on the issues and ethics of the industry. On World Press Freedom Day, everyone is invited to show their support for freedom of the press, those who work in the media and journalists who have lost their lives in pursuit of a story. .

Isha Khan has dedicated her career to issues of inclusion and equality. Prior to joining the Canadian Museum for Human Rights as President and CEO, she led the advancement of rights as Executive Director and Senior Counsel at the Manitoba Human Rights Commission. She is also Chair of the United Way Winnipeg Board of Directors, a member of the Equity Committee of the Law Society of Manitoba and one of the founders of the Canadian Council of Muslim Women (Winnipeg Chapter).

Andree Lau is CBC Digital’s News Editor. Prior to joining CBC, Andree rose to the ranks of Managing Editor of HuffPost Canada in 2017 after joining the online outlet in 2012 to launch its BC edition. She previously worked for CTV Ottawa and worked for CBC as a TV reporter, VJ and online editor. Andrée is a graduate of Carleton University.

Brent Jolly is the Executive Director of the National News Media Council of Canada. He previously worked with the organization as director of communications, research and community management. Brent has also worked as a journalist for various news outlets, both as a writer and editor. He is currently National President of the Canadian Association of Journalists. Brent is a graduate of Carleton University.

Travis Dhanraj is CBC’s Senior Parliamentary Reporter. He joined CBC after 3 years as Queen’s Park Bureau Chief at Global News. He previously worked with Bell Media, Rogers Communications Inc. and as a producer for CBS News. Travis is a graduate of Ryerson University.

Pre-registration for this free event is mandatory. One lucky entrant will be randomly selected to receive a prize package from CBC Manitoba and the Canadian Museum for Human Rights.

Location: Online event – tickets are free but registration is required.

Tongue: This program will be presented mainly in English with French subtitles.

Get the best of CBC in your inbox. You’ll receive stories that matter to Manitobans, stay up to date with the latest CBC TV, music and arts news, and find out how you can meet us in the community. We organize the best of the best, just for you. Register here.