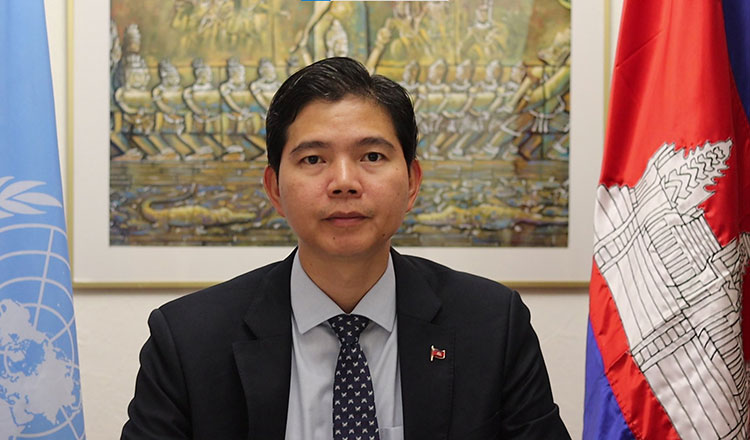 The Permanent Mission of the Kingdom of Cambodia to the United Nations in Geneva on Friday rejected a report on press freedom in the country published by a United Nations human rights body, which claims it is loaded with content biased, selective, prejudicial and unfounded as well as a conclusion of a political nature.

On Thursday, the Office of the United Nations High Commissioner for Human Rights (OHCHR) released the document entitled “Report on the state of press freedom in Cambodia”, which criticizes the freedom of the press and the safety of journalists in Cambodia.

In the report, the OHCHR said that journalists in Cambodia are subjected to various forms of harassment, pressure and violence while the existing legal mechanism, such as Articles 305 on defamation of the Penal Code as well as laws on measures Covid-19 makes it more difficult for journalists to do their job.

“Journalists in Cambodia report working in an increasingly difficult environment, an environment that is particularly difficult when it comes to accessing information from public sources,” he said.

“While authorities have passed laws that appear to restrict the right to freedom of expression, they have delayed finalizing a promised new law that will allow journalists and media personnel to access official information.

On Friday, the Permanent Mission of the Kingdom of Cambodia to the United Nations Office and other international organizations in Geneva issued a response to the OHCHR report, rejecting the document and describing it as “tainted with a conclusion of a political nature “.

The mission said in the statement that the claim that journalists in the Kingdom suffer from mistreatment, abuse and censorship is biased and selective.

“Cambodia cherishes professional journalists who do not violate the rights of others or distort the facts,” the mission said.

“Its press law guarantees the confidentiality of their sources, maintains their independence and prohibits censorship before publication. The application of the law on journalists and entities that break the law cannot be interpreted as a restriction of the freedom of the press.

The mission added that the OHCHR report did not take an objective, impartial and non-selective approach. The government’s factual comments have not been fully, completely and accurately reflected.

“An example is an erroneous quote found in paragraph 54 of the report as to the status of the Access to Information Bill (A2I Bill). The truth is that discussions on the A2I Bill were concluded at the level of the technical working group between line ministries,” he said.

“Unfortunately, the UN report with allegedly high standards, credibility and integrity claimed that the talks ‘have not been completed’. As always, OHCHR is negligent when it comes to government contribution.

The Cambodian mission also questioned the research methodology applied by OHCHR to obtain the data and information that inspired the report.

“The non-scientifically selected sample of 65 journalists, citizen journalists and other media personnel for interviews and surveys does not accurately represent the views of nearly 6,000 national and international journalists, excluding the significant number of journalists citizens, working freely across the land,” it said.

The mission added that OHCHR’s reliance on foreign-funded NGO publications and media reports also prevents it from acknowledging the considerable positive steps taken by the government to ensure that the press can report freely and safely. security.

“Among these are the decriminalization of defamation cases through the media, legal aid offered by the Ministry of Information and the Prime Minister‘s Volunteer Lawyers Unit to all journalists in conflict with the law, and the classification of journalists in the priority group receiving free and non-discriminatory information. Covid-19 vaccination,” he added.

According to the Ministry of Information, in 2021 there were a total of 2,017 registered media outlets, including 706 websites and 81 video news outlets and 23 of them are under foreign ownership while the number of domestic journalists and international is 4,230.