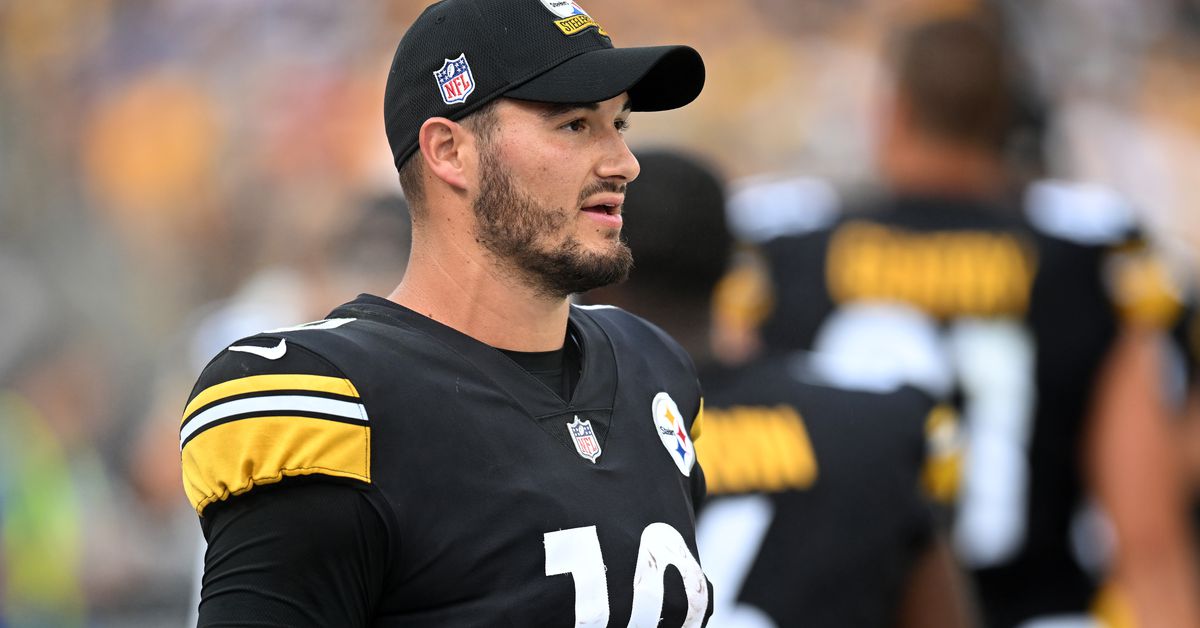 With the Steelers on a short week, we had a press conference from Mike Tomlin on Monday. With many players discussed, it’s time for another player that Coach Tomlin mentioned during his media time. Remember, these are current players who were asked a specific question during the Q&A period.

Nine different questions were asked of Coach Tomlin regarding quarterback Mitch Trubisky. Coach Tomlin was asked if Trubisky should be more aggressive looking down.

In a follow-up question, Coach Tomlin was asked how much freedom Trubisky had to drop a game and take a shot with individual coverage.

“There are probably individual opportunities outside of every game concept we put in place, so it probably wouldn’t require any of the changes you’ve described. We have long shots drawn in a lot of things. Sometimes it’s just a matter of whether or not we get the right look or whether we like the match in the look.

In a later question, Coach Tomlin was asked about Trubisky’s comments after the game regarding sticking to the plan and the players not suggesting different games in the squad.

“I don’t know. I hadn’t spoken to Mitch, so I don’t know what you’re referring to, but for the most part it’s a good battle to fight usually. We have playmakers, young playmakers, guys with a lot of talent, guys who want to be the reasons for our success. So I’d much rather say ‘woah’ than ‘sick’. I think that’s just a general attitude that we have as competitors on a competitive football team in a competitive organization, we’re not going to create a problem with guys who want to be the reason we’re successful.

In a later question, Coach Tomlin was asked if Trubisky was being too careful since they praised him for taking care of the ball during pre-season.

“I think when you lose and you don’t have enough points and you don’t produce enough splashes, that’s all up for debate. But that’s not a debate we’re going to be in. We’re going to just roll up our sleeves and get back to work with a better desired outcome for this next outing.

In a later question, Coach Tomlin was asked about quarterback mobility that was something attractive about Trubisky and what more they could do to utilize that particular skill set.

“Whether by design or at will, I just think it’s a component of the game that has value in today’s game, so that’s what I was referring to. I’m not going to come and install the triple option if that’s what you’re referring to.

In a follow-up question, Coach Tomlin was asked if he could use more with him.

In another follow-up question, Coach Tomlin was asked about Trubisky’s ability to convert third down on passes through the middle and if there are things the Steelers can do conceptually to give him better opportunities or if he must see these things himself.

In another follow-up question, Coach Tomlin was asked if he was okay with Trubisky throwing the sticks on third down and if that was the right call.

“Yes, there are certain circumstances that I am.”

Building on the previous question, Coach Tomlin was asked if this was appropriate during the fourth quarter on Sunday.

“There was one case where they had a good call, they got us in [Cover] 0 and according to the concept we had, it didn’t have many options. There was another instance where maybe he should have kicked the ball downfield. As I mentioned, you might go around in circles in circumstances like this. We own our mistakes. We realize that we have to improve. It’s just a broad and general answer to some of those specific questions you might have.

In a later question, Coach Tomlin was asked what he liked about Trubisky in the first two games.

“I liked him a lot to be completely honest with you. I think he did a good job doing the things that come with the job. The intangible things, the leadership things, the communication things, detailing and communicating the offense, working hard to execute our program, the things we want to work on. We haven’t scored enough points here the last two weeks, but it’s the collective, not just the quarterback position and not just the players. We are all responsible for ringing the scoreboard. So we are not looking for comfort. We don’t try to drown out the noise. To be completely honest with you, we don’t care about noise. We’re just working on the things that are within our control to have a great day and keep this group moving forward developmentally, knowing that the outcome will be what we desire if we keep doing those things.

In the last question from the press conference, Coach Tomlin was asked how the young guys reacted to what Trubisky did as a leader.

Steelers fans have been disappointed with the lack of use of second-round pick George Pickens so far on the Steelers offense. Coach Tomlin was asked if there was anything more they could do early in the season to involve a Pickens.

“We will continue to work.”

The only player who didn’t finish Sunday’s game that was mentioned at the postgame press conference was linebacker Devin Bush. Coach Tomlin was asked if he had any further news on Bush’s injury.

“I think he should train tomorrow. But as always, you can let participation in the practice guide you in terms of availability.

“He’s a growing youngster. We find ways to bring him to the field. He’s taking advantage of opportunities and making a few plays in the meantime, and I just think it’s reasonable to expect all of that to continue. We will find ways to get him on the pitch, he will learn and he will make more plays. He will get better. It’s just a natural maturing process of a young man doing enough to get new opportunities.

With questionable play at quarterback, fans at Acresure Stadium on Sunday were chanting for first-round pick Kenny Pickett. Coach Tomlin was asked if it was annoying to hear fans call Pickett.

For more on Mike Tomlin’s press conference, check out the podcast below:

If you’d like to watch Mike Tomlin’s press conference, you can do so below: