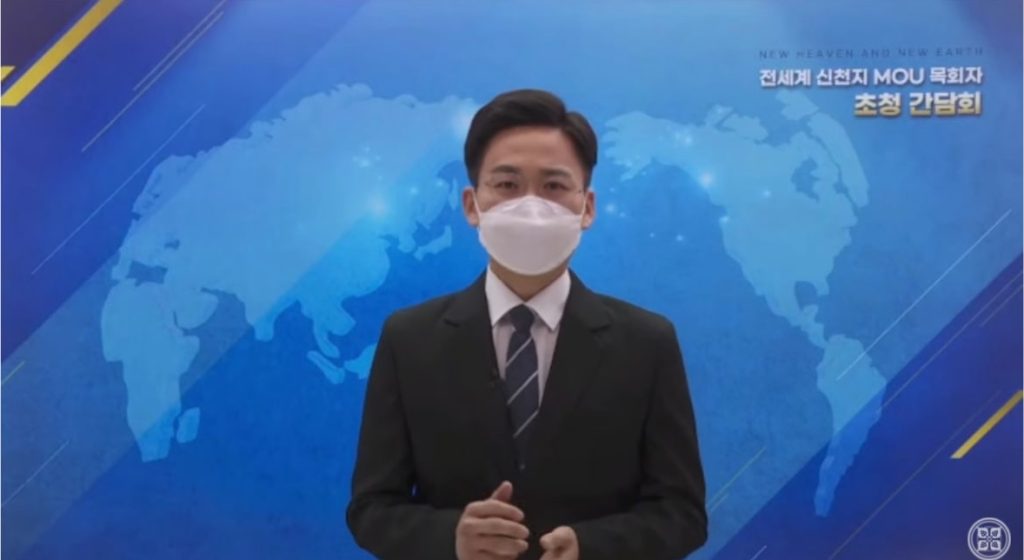 (The Magazine Plus Editorial): – Melbourne, Victoria April 4, 2022 (Issuewire.com) – The Shincheonji Church of Jesus, Temple of the Tabernacle of the Testimony (or Shincheonji Church) held a press conference on April 2 with pastors from various countries around the world, which have established memorandums of understanding with Shincheonji. The online event brought together 1,500 pastors from around the world as well as reporters and journalists on ZOOM.

Shincheonji Church of Jesus held this event to share the progress of the webinars that started last year, the MOUs established so far, and some sample cases. Mr. Kim Shin-chang, the head of the International Missions Department said, “Many African participants at the Bible seminar in August last year reached out to establish memorandums of understanding with us. This led to the first MoU in September with the ‘Worship in the Presence of God’ church in Uganda,” he explains how Shincheonji began establishing MoUs with other churches.

Some case examples and testimonies of pastors who have established MOUs with Shincheonji were shared at the press conference.

Dongsu Kim, the head pastor of Peace Church confessed, “In the past, all I preached was that everyone should believe in Jesus and that by sharing grace in this way, it would lead to salvation. Without accomplishment, I thought heaven was somewhere you went after death. I thought there was a resurrection after death,” expressing his mistaken beliefs about salvation.

Pastor Kim is currently teaching the Revealed Word of Shincheonji to his own congregation. He also said, “The time has come for all pastors to come and learn so that they can live a life of faith in the correct truth. I want to share the Revealed Word of Shincheonji with my fellow pastors. I want them to learn the Word and realize that their ideas of salvation are incorrect.

Pastor Willifred Endohu, a pastor who has been leading his church for 11 years in Côte d’Ivoire, introduced himself saying, “I studied theology in a seminary and was trained to be a pastor through prayer meetings and I started serving a church in a very small room. Fortunately, 11 years later, my congregation has about 500 members. I am also a lecturer at a seminary institute.

Pastor Wilifred Endohu is currently learning Introduction Level Lesson 16 at the Zion Mission Center in Shincheonji. “My thoughts and knowledge of the Bible have been shattered and changing through the lessons I learned at Shincheonji. Jesus and the Word that became flesh struck a chord in my heart. I also want to preach the Revealed Word after finishing studying. I want to share this Word with people in my congregation who have been following me for 8 years,” he said, showing his aspirations after finishing classes at Shincheonji.

He also added, “I want to express how grateful I am to the President because that is how I was able to receive the revealed Word of God. He couldn’t have taught such a profound Word if he hadn’t met God and Jesus. I want to tell my fellow pastors that what I have seen and verified is that all the answers are in the Bible and Shincheonji testifies to those answers according to the Bible. Please come check it out for yourselves.

President Lee explained how he came to share the Word and the role of pastors today.

In his closing remarks, President Lee said, “We must become freedom fighters of the kingdom of God who restore what God has lost. Let us fight and overcome the devil with the blood of Jesus and the word of testimony and create the people of the kingdom of God so that God can finally come to rule the world after 6000 years. What’s this [God] made us known through the Bible. I hope everyone engraves the words of all the chapters of Revelation – which is the law of heaven – on their hearts. There is only one God, one Bible and one hope. We, as those who believe in God, are also one. We are a!”

Some case examples of establishing Memoranda of Understanding were also shared. A church called, The Primitive Church of the New Era, in the United States of America, invited an instructor from Shincheonji, where some 100 church members are learning the teachings of the Shincheonji Church of Jesus. After completing Bible studies at Shincheonji Church of Jesus, a Filipino pastor also teaches his congregation. A seminary school in Pakistan opened classes at the institution after its dean established a memorandum of understanding with Shincheonji.

According to the Shincheonji Church of Jesus, 2,155 pastors, 22 seminary schools, and 958 churches in 67 countries have MOUs with them. The Shincheonji Church of Jesus provides theology materials and instructors to churches and seminary schools that have entered into memorandums of understanding with them to educate people about the Bible, as mutually agreed upon in the agreement.

The press conference can be viewed on Shincheonji’s official Youtube channel (https://bit.ly/SCJyoutube).

The Shincheonji Church of Jesus has been teaching revelation and the secrets of the kingdom of heaven through online seminars since October 2021. The 12 tribal leaders followed suit during President Manhee Lee’s first conference on revelation and they are all available in 24 different languages ​​on Youtube, with over 1.5 million views to date.

Shincheonji Church of Jesus broadcast the Intermediate Lessons on Youtube beginning March 31 and ending June 27, at 10:00 a.m. every Monday and Thursday, on their official Youtube channel.